Taipei, Taiwan -- Buddhists, politicians and diplomats gathered in front of the Presidential Office yesterday to celebrate Mother’s Day and the 2,633rd birthday of Sakyamuni Buddha. 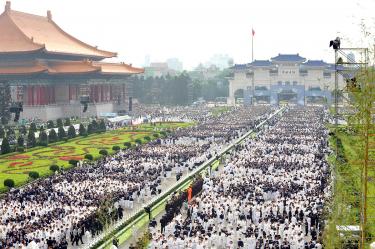 << Thousands of nuns and followers from the Buddhist Compassion Relief Tzu Chi Buddhist Foundation gather in front of the Chiang Kai-shek Memorial Hall in Taipei yesterday to celebrate the Buddha’s birthday, which is marked tomorrow in Taiwan.
Photo: Patrick Lin, AFP

Thousands gathered on Ketagalan Boulevard on what was the third time the annual event had been held outside the Presidential Office.

This was also the first time President Ma Ying-jeou did not personally attend the event.

Ma, who was in Greater Tainan in the morning, phoned in and gave his greetings, which were broadcast to the crowd.

Vice President Vincent Siew, who attended the event on Ma’s behalf, said the occasion held profound significance as it commended the benevolence of Sakyamuni Buddha and recognized the devotion of all mothers.

“We also want the world to see Taiwan’s democracy, freedom and vibrant development of religion,” he said.

The legislature approved a proposal in 1999 to designate the birthday of Sakyamuni Buddha — which falls on the eighth day of the fourth month of the lunar calendar — a national holiday and to celebrate the special occasion concurrently with International Mother’s Day, which is celebrated on the second Sunday of May.

Siew urged the public to practice the “three acts of goodness” and the “five harmonies,” adding that if such universal values could reach every corner of the planet, the world would be a better place.

The “three acts of goodness” refer to doing good deeds, saying good words and having good intentions. The “five harmonies” refer to being kind to oneself, sensitive to one’s family, generous to friends, devoted to social harmony and committed to world peace.

The event was organized by the Fo Guang Shan Foundation.

Marking the Bathing Buddha Festival, Master Hsing Yun, founder of the Fo Guang Shan Monastery, led participants in performing the “bathing Buddha” ritual where he held a wooden ladle and poured water over a small statue of the Buddha.

Bathing a statue of the Buddha symbolizes a fresh start in life and the care given to newborns. Legend has it that when the Supreme Buddha, Siddhartha Gautama, was born, there were auspicious signs heralding his birth. They describe the sky as blue and clear on his birth, with dragons spurting purified water to bathe him. Since then, Buddhists have celebrated their religion’s founder’s birthday by using fragrant water to bathe the image of Buddha.

Master Hsing Yun said people bathing today were cleansing the impurities of anger and hatred from their minds.

Master Hsing Yun said that Sakyamuni Buddha is a human being, not a god, as a god has emotions.

A god punishes and rewards, “but a Buddha does not do that,” he said.

What a mother gives to her child, he said, is compassion, wisdom, tolerance, generosity and the ability to discipline and guide oneself. As long as a person can discover these treasures, that person could make the best of himself or herself, he said.

A Japanese lawmaker from Yamanashi Prefecture presented a thank-you certificate to Master Hsing Yun issued by Sadakazu -Tanigaki, president of Japan’s Liberal Democratic Party, to thank Taiwan for the NT$5.8 billion (US$1.8 billion) in cash donations and 500 tonnes of provisions given to the country in the wake of the March 11 earthquake and tsunami.