Taipei, Taiwan -- Smoke billows daily from temples across Taiwan as visitors burn incense and paper money to bring luck and prosperity – but that familiar fragrant haze could be a thing of the past as concerns grow over ritual pollutants. 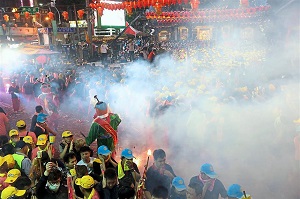 << Harmful microscopic PM2.5 particles were 60 times above recommended levels along one route during last months celebration on the Taoist sea-goddess Matzu.

The potential damage to the environment and to the health of devotees from staggering levels of dangerous particles in the air is leading some temples and festivals to seek alternative – if less spectacular – practices, despite resistance from worshippers.

Famous temples such as the Taoist Nan Yao in central Changhua city – one of the island’s largest and oldest temples – are playing firecracker CDs instead of launching the real thing, as well as encouraging followers to clap hands to create smoke-free noise.

The popular Taoist Hsing Tian Kong temple in the capital Taipei has banned worshippers from burning incense, requesting they simply bring their hands together to pray, instead of holding the burning sticks. Other temples are sending paper offerings to be burned at state incinerators so the fumes can be treated.

And in New Taipei City, water lanterns that pollute the river have been replaced with a wall of lanterns outside a temple.

While the new alternatives may not be quite as atmospheric, activists say it is time for change. “People come to temples to pray for good health, but the way they are worshipping is not healthy,” said Yeh Guang-perng, founder of the environmental group Air Clean for Taiwan. “They might not get sick right away, but long-term exposure would be harmful to their health.”
Harmful microscopic PM2.5 particles were 60 times above recommended levels along one route during last months celebration on the Taoist sea-goddess Matzu. - AFP

Harmful microscopic PM2.5 particles were 60 times above recommended levels along one route during last months celebration on the Taoist sea-goddess Matzu.

Taoism and Buddhism are the predominant faiths in Taiwan, each with millions of followers and with worship centering around temples and festival events.

Environmental groups have also warned over hazardous chemicals, such as benzene and methylbenzene, released from burning incense and paper money.
Old habits

But some devotees are reluctant to let go. “The traditional belief is that the more firecrackers and incense used, the sincerer the faithful will appear and the more good fortune will be bestowed on them,” said Chiu Jainn-fuh, director of Nan Yao Temple.

The temple for the first time cancelled a budget of NT$1mil (RM124,200) for setting off firecrackers at a recent Matzu pilgrimage it hosted, but about half of its devotees refused to follow suit and set off their own, he said.
Heavy smoke coming from burnt offerings and incense outside a Matzu temple.

Heavy smoke coming from burnt offerings and incense outside a Matzu temple.

Dajia Jenn Lann Temple, in central Taichung city, also Taoist, is encouraging worshippers to dedicate fresh flowers and fruits to deities, and to donate the money they would spend on firecrackers to charity. Again, the reaction has been mixed from worshippers.

“Actually the smog coming from China is far more serious. Air pollution is not caused by religious activities alone,” read one message on the temple’s Facebook page.

“Some followers are unhappy, especially elderly people who think they are being disrespectful and we can’t force them. It’s not easy to change and it takes time,” said Yen Chin-piao, president of the temple.
Scientific approach

Authorities are banking on a scientific approach to persuade sceptical worshippers to go green. The levels of PM2.5 registered at last month’s main Mazu festival pilgrimage were posted real-time online by Taiwan’s Environment Protection Administration (EPA), which sent a dedicated team to follow the celebrations for the first time.

“We hope that with the scientific proof from the on-site data, we can persuade the public to change,” said Chen Shyan-heng, head of the EPA’s air quality protection and noise control department.

The EPA has promised to bring in new restrictions on the amount, location and timings for setting off firecrackers within the next year, after pressure from lawmakers shocked by air pollution at the Mazu celebrations.

Currently, only setting off firecrackers at restricted hours is punishable under a noise control law, with a maximum fine of NT$30,000 (RM3,725). There is no official record of how many religious establishments are now adopting green approaches. Taipei’s Hsing Tian Kong and the Buddhist Dharma Drum Mountain in New Taipei City are the only ones known to have imposed an outright ban on worshippers burning incense and paper money. But environmentalists say awareness is growing.

“We need to cut down on the religious offerings that pollute the environment and hurt our health in a world with growing pollution,” interior designer Lai Su-hui said during a visit to temple in central Taipei.

“Sincerity matters the most and the gods will bless us.”
TOP