CULTURALLY ACCEPTING:The style of the statues are reminiscent of those that were made during the Tang Dynasty, Dafowang Temple master Shih Sing-yan said

Taipei, Taiwan -- Twenty-two five-story tall statues of Buddhist deities tower over the landscape in Hsinchu County’s Fonggang  area near the Sibin Expressway, making them a cluster that is considered a “temple” in and of themselves, the first of seven such clusters that are to be built at Dafowang Temple  on Mitoushan  in Jhubei City. 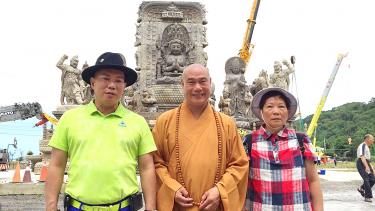 The temple plans to construct seven sites and a religious museum, hoping to spread knowledge of Pure Land Buddhism, the school of Buddhism that the temple ascribes to, temple master Shih Sing-yan  said.

The statue cluster comprises of one sitting and one standing form of the Ksitigarbha bodhisattva, statues of the Caturmaharajakayikas - the four heavenly kings -  and attending gods.

The style of the statues differ from those commonly seen in Taiwan, and are reminiscent of those that were carved during the Tang Dynasty, Shih said.

The features of the statues, Middle Eastern, Indian and Nepalese, shows how the Tang Dynasty was culturally accepting of its neighboring nations while remaining strong and affluent, Shih said, adding that he hopes that such a grand age could be seen again in Taiwan.

The wall behind the standing form of the Ksitigarbha bodhisattva, formed out of six pieces of rock, has chapters one through 12 of the Sutra of bodhisattva Ksitigarbha’s Fundamental Vows carved on it, while the last chapter of the Sutra was carved on the pedestal on which it stands, Shih said.

The other statue clusters intended to be built on temple grounds, that of the Thousand-armed Avalokitevara bodhisattva, would have the Great Compassion Mantra carved onto 88 bodhisattva figures on the wall behind Avalokitevara, while the contents of the 25th chapter of the Saddharmapundarika Sutra would be carved on the pedestal, Shih said.

The clusters would not all feature independent statues, but would also include large blocks, which would feature other figures of Buddhist history or mythos, Shih said.

Dafowang temple was founded five years ago on more than 30,000m2 of land.