A Buddhist Tends to her Flock in Taiwan

Taipei, Taiwan -- At 4 am each day, a 70-year-old Buddhist nun rises from her sleep and leads 150 nuns in prayer in a modest wooden temple on the east coast of Taipei, nestled between a mountain range and the Pacific Ocean. 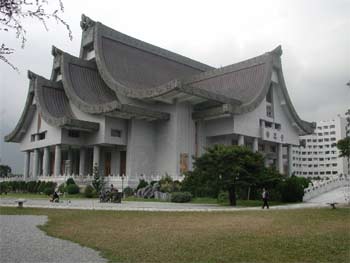 This unlikely setting is the home of the biggest non-government organization (NGO) in the Chinese-speaking world, with 10 million members in more than 30 countries around the world and annual donations of US$300 million.

Founded in 1966 by Master Cheng Yen, as she is now known, the Tzu Chi Foundation runs seven hospitals, a university, a recycling programme with 57,000 volunteers, more than 60 schools, Asia’s largest bone marrow bank, a global television station and has delivered medical and humanitarian aid to more than 60 countries.

Inspired by the teachings of Buddha and the work of Albert Schweitzer and Mother Theresa, its volunteers seek to follow a creed of ‘Buddhism in action,’ implementing love and good works all over the world. The core are its 1 million volunteers, of whom 10 percent work full-time for no pay. It is a Buddhist organization in which lay people are the key players.

This year Tzu Chi has delivered food, clothes and medicine to victims of disasters in countries across the world, including China, Indonesia, Malaysia, Philippines, South Africa, Lesotho, Bolivia, Argentina, Mexico, and the United States, as well as Taiwan. No other charity in the Chinese world provides aid on this scale and to people of all races and religions. The bone marrow bank, established in 1993, has provided bone marrow to more than 1,400 people from 23 countries.

“Traditionally, Chinese only helped their own family or their own community,” said Richard Madsen, head of the sociology department at the University of California at San Diego and a Maryknoll father for three years in Taiwan.

“Tzu Chi helps the whole world. This is a global vision, suitable to the cosmopolitan and middle-class Taiwanese. Cheng Yen has given a vision to this. This is a major contribution to the Chinese world.”

The charity’s biggest program of aid outside Taiwan is to mainland China, where it has built 38 schools, 4,100 homes for the poor, 10 nursing homes for old people, 13 day care centres, dug 5,000 wells for farmers in arid Gansu province and provided scholarships for 7,000 students.

This aid has provoked fierce controversy in Taiwan, where many opposed giving aid to what they see as ‘the enemy’, especially during times of tension, such as the 1996 missile crisis and the Qiandao Lake incident of March 1994, when 24 Taiwanese were murdered on a tourist boat and the was investigation handled ineptly by the police. But Cheng Yen has insisted on continuing the aid, which she sees as a ‘bridge of love’ between the two sides.

“The people in the mainland and Taiwan are innocent,” said Kao Ming-san, a volunteer from Taiwan working in the mainland since 1997. “The tensions between the two sides are the result of politicians. Love can ease the tensions and avoid war. The people there are very polite to us. We do not talk of politics or religion.”

Cheng Yen was born into a modest family in Chingshui, west Taiwan on May 14, 1937, when Taiwan was a Japanese colony. When she was 11 months old, her parents gave her to the brother of her father and his wife, who brought her up. She was traumatized by the sudden death of her adopted father, a cinema manager, of a brain hemorrhage in June 1960 at the age of 51 and turned to Buddhism. She left home and established her own community of nuns in Hualien, a port city on the east coast and one of the poorest regions of Taiwan.

Their early work was to provide cash, food and clothes to the poor and victims of natural disasters in the Hualien area. Its first major project was construction of a hospital in the town, which opened in August 1986. It was the first Buddhist hospital offering western medicine in the Chinese world.

The foundation grew rapidly after the lifting of martial law in July 1987, when civil society blossomed in Taiwan, and it opened its first overseas branch in the United States in December 1989. Its membership rose from 80,000 members in 1986 to 1 million in 1990 and 3 million in 1994.

In October 1999, the foundation launched a global channel, Da Ai Tai (Great Love Television), to reach members abroad and help it expand beyond the Taiwanese community, who account for a majority of its members. It was also out of disgust at the sensationalism and tabloid journalism of the Taiwan media.

Cheng Yen gives her disciples 10 interdictions, which include chewing betel nut, because it causes cancer, and taking part in politics. She has succeeded in keeping her foundation neutral in the intense political climate of Taiwan.