The Pure Truth and Benevolence Is Really Good

KAOHSIUNG, Taiwan -- At the Divine Performing Arts' premiere in Kaohsiung on March 4, there were some Buddhist monks and nuns wearing yellowish frocks in attendance. They were from the Baoding Buddhist Monastery at Bingdong County in southern Taiwan. The abbot of the monastery Shi Faguang took twelve of them to see the Spectacular. 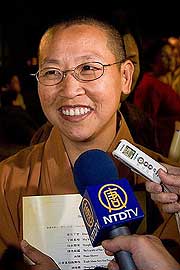 It came out that Shi Faguange was very much impressed by the show. He said, "I noticed the tenderness and beauty performed by them." "I was looking at every act carefully, including every performer's posture and facial expression, etc. It's surely not easy to express something like fairies on the earth. I also found great compassion and gracefulness in them. The show was so exquisite and wonderful that I really admire them."

Shi Wuyong, another Buddhist monk sitting next to Shi Faguange, added, "I was deeply moved by the act 'Descent of the Celestial Kings' at the very beginning. We probably came to this place because of our greed and attachments. I felt so sad and wanted to cry. I asked myself. What was I greedy for? Why can others be so leisurely and carefree, but I myself was still wandering in the secular world. Those dances were very impressive."

While watching "The Risen Lotus Flower," Shi Wuyong enlightened, "A true believer would protect his fellow practitioners, and if necessary, he would sacrifice his life to save others. A disciple is steadfast in his belief; in the end the Buddha would guide him on the path. Once you are determined to achieve something compassionate and righteous, you must persevere to accomplish it. Don't hesitate and no need to have a second thought."

"They have made the song inspiring, and the lyrics and their voices are heart-stirring. Enlightened by the lyrics, Shi Wuyong expressed, "Everyone should arouse his own self-consciousness, and take initiative to help improve the climate in society. We can benefit a lot from the lyrics with a peaceful mind. You may question yourself, what are you after on earth? Why don't you purify yourself and return to your original true self with the truth, the good and the beautiful?"

Shi Wuyong further added that every act was marvelous and meaningful. Among them was the "Lady of the Moon," which showed us the good qualities of loyalty, filial piety, moral integrity and righteousness. They really touched our hearts. But unfortunately modern people are lacking in these qualities, as they are simply concerned about themselves, rather than others. The entire show seemed to convey a message to us that it would be a happier existence to give than to take."

Another Buddhist nun Shi Wutong said that she loved the backdrop the most. She said, "It is marvelous to see the Buddha coming down with Pegasus from heaven. The state-of-art technology is very advanced, so they look as if they are real. For example, in the 'Lady of the Moon,' the fairy was seemingly flying to the moon."