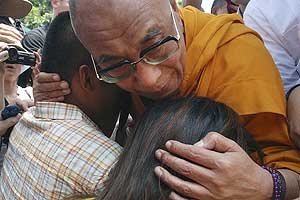 The Dalai Lama spent the day in southern Taiwan, visiting the area devastated by the typhoon, which authorities on Monday said killed 602, with 81 missing. The Buddhist leader conducted prayer services and spoke with grieving family members.

Although the Dalai Lama has denied that he wants to promote Tibetan independence, China has criticized the exiled spiritual leader for fomenting separatism and it strongly discourages countries from receiving him. Beijing has strongly denounced his visit, saying it could have a "negative influence" on improving ties between the one-time foes.

The exile leader Monday again emphasized that his visit was non-political and purely humanitarian. However, he also praised Taiwan's democracy and encouraged Taiwan to preserve it.

"In any case, Taiwan should have very close and unique links with mainland China, close of economy and close of defense," the Dalai Lama said, "But at the same time, Taiwan already enjoys democracy and economic prosperity … most important, you achieved democracy that you must preserve."

As part of his efforts to sought to ratchet down the tensions resulting from the visit, the Dalai Lama on Sunday canceled the only press conference of his five-day trip and downsized the scale of a scheduled mass prayer ritual. He also expressed understanding for the decision of President Ma and other member of the ruling party from meeting him.

"I don't want to create any inconvenience for anybody," he said. "No problem."

Last week, Mr. Ma approved his visit, which was made at the request of opposition party members. They asked the Dalai Lama to come to comfort the victims of the typhoon, the worst to hit the island in decades.

The 74-year-old, who is considered by many Buddhists to be a living god, was greeted Sunday night at Taoyuan railway station, where he was boarding a train to Kaohsiung, by protesters who favor reunification with China. The spiritual leader considered the protest as a sign of free expression.

"No problem, I myself totally dedicate to the promotion of democracy," he said "I like it, I love that."

The local media has reported that Beijing has slowed down its exchanges with Taiwan because of the Dalai Lama's visit. But, Liu Te-hsun, spokesman of Taiwan's Mainland Affairs Council, said "Whether there is any negative impact remains to be seen."

Sunday night, the Chinese government-run Xinhua news agency reiterated China's opposition to the trip. But it limited the brunt of its criticism to the opposition Democratic Progressive Party."

"The Democratic Progressive Party (DPP) has ulterior motives to instigate the Dalai Lama, who has long been engaged in separatist activities, to visit Taiwan," according to a spokesman for the State Council Taiwan Affairs Office, which was carried by Xinhua.

"We resolutely oppose this and our position is firm and clear," the spokesman said. "The Dalai Lama's visit to Taiwan is bound to have a negative influence on the relations between the mainland and Taiwan. We will keep a close eye on the situation."