Melbourne, Australia -- TWO BUDDHIST groups are calling for the council to build a carpark near their Springvale South temples. 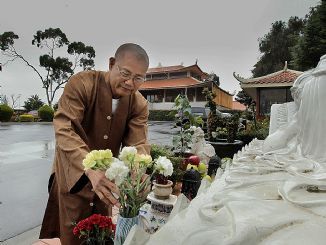 “We very much need a carpark for the Vietnamese community and Cambodian community to come and park at Spring Valley Park,” Mr Thich said.

“The need for a secure public carpark is always a difficult hurdle for all of the event organisers,” Ms Nguyen said.

Greater Dandenong CEO John Bennie said a proposal had been put to council to consider an indented section of Spring Valley Park to meet the needs of visitors to the Vietnamese Buddhist Temple and the Cambodian Buddhist Temple.

Mr Bennie said public consultation was needed to determine whether the section of the park between the two temples could become a carpark.

He said the proposal was for about 80 car spaces.