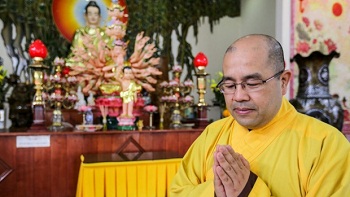 The phoney monks have been seen greeting passers by with smiles and bows before asking for cash in exchange for prayer beads, amulets and spiritual guidebooks.

Minister for Consumer Affairs Jane Garret urged Victorians to be wary if anyone dressed as a Buddhist monk approached and asked for money.

"These heartless conmen operate by taking advantage of Victorians' generosity," she said.
Advertisement

"It is an important and worthwhile practice to donate money to charity, but Victorians need to do their homework to ensure the fundraiser is legitimate."

The hoax has been reported in Melbourne's CBD and popular tourist areas. The fraudsters have also been spotted roaming the suburbs, including Sunshine and Preston.

The scammers were often reported to be dressed in orange robes with shaven heads but also have been seen in darker clothing. They included both men and women.

Some carried notebooks in order to record donations and "bless" the donor.

Buddhist monk Phuoc Dan of Braybrook's Quang Minh Temple said that according to a 2500 year old rule laid down by Buddha himself, monks were forbidden to ask for  money.

Consumer Affairs warned against giving any money to face-to-face collectors who could not provide identification or details about their organisation.

Legitimate fundraisers are registered on the Consumer Affairs website.