Warnervale, Australia -- A $100, 000 model of the Buddhist temple planned for the Central Coast goes on public display. 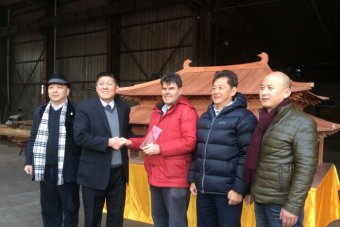 "It's been made to exact detail out of timber, it's the largest model we've ever got in council and that's why it's at Westfield because we couldn't actually get it through the doors at the council chamber," said mayor Doug Eaton.

Plans for an $83-million temple, which is the first phase of the controversial Chinese theme park proposed for Warnervale, have been lodged with Wyong Council.

Local member David Harris, who has strongly questioned the positioning of the development on industrial land, is pleased locals are being consulted.

"It's probably the biggest single issue since I've been involved in politics on the Central Coast," he said.

"We needed an eight-foot doorway, so we couldn't fit it in Council Chambers," said Cr Eaton.

"It's big, and it's wooden. You can only see the outside. I will go back and have another look, but I got some interested comments from people sitting in the nearby cafe who weren't overly impressed with it," said Mr Harris.

Council is encouraging the community to look at the model and make comments on the DA.

It will be on public display for the next couple of months.