Small paws on the path to Buddhist enlightenment

Sydney, Australia -- THERE were purebreds and mongrels, shaggy dogs and short-haired cats, divas and ruffians. And, to the amazement of their owners, barely a bark or paw-swipe in protest as the saffron-robed Tibetan Buddhist master came to help family pets on the path to enlightenment. 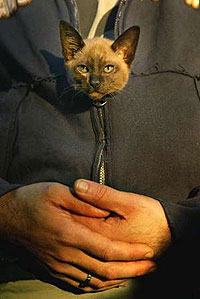 Care for all living things is a central tenet of Buddhism and, in an inner-city bayside park yesterday, Lama Zopa Rinpoche, who counts the Dalai Lama as a teacher, blessed about 100 cats, dogs, even mice and mudcrabs.

"Animals don't have as many opportunities as humans to attain happiness," said Lama Zopa, who believes animal blessings are a way for Buddhists to generate compassion and collect merit.

Lama Zopa advises pet owners that it is not enough to just provide comfort for their animals and suggests taking them around holy objects, reciting prayers in their ears and blessing their food.

Buddhists from Sydney's Vajrayana Institute, sponsors of the lama's visit, have rescued crabs from fishmarkets as well as sheep destined for slaughter.

During Lama Zopa's Sydney visit they are also helping to raise funds for the lama's new animal sanctuary, which is to be built near the Kopan Monastery in Nepal.

Buddhism is now the fastest-growing religion in Australia, with migration and conversions almost doubling its numbers between the 1996 and 2001 census according to Dr Cristina Rocha, a postdoctoral fellow with the University of Western Sydney's Centre for Cultural Research and the author of a new book, Zen in Brazil.

"Buddhism is attractive because it provides a powerful antidote to the stress, greed and violence of today's world," she said.

"Westerners find it gives them tools to cope with the day-to-day, and helps them detach from the rampant consumerism and stresses of their busy lives."

She said animal blessings came from the idea that all sentient beings are in this world of suffering and need to hear the word of the teachings of the Buddha to be liberated.

In addition, in Tibetan Buddhism there is a belief in rebirth - that is, that humans can be reborn as either humans or animals.

"Being compassionate towards animals is just a logical consequence," Dr Rocha said. "Although the sanctuary is intended for animals that would otherwise be killed, Westerners welcome the blessing of their pets as a way of giving them tranquillity and/or spiritual protection, something they themselves seek in Buddhism.

"I guess the desire for blessings comes from the close identification and love between the owners and their pets."