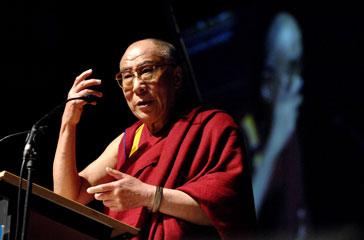 He made the comment to companions as he left a sellout address at the Arena under police escort bound for a flight to Canberra.

"He was very positive and said that there were beautiful people here,'' Buddhist monk Geshe-la Soman Thargye said.

"Really, we are very lucky to have had him two times to Geelong.''

"I think it might be a little bit too much to ask; so many countries, so many cities  want him there is no chance of that you know,'' he said.

People who missed Monday's sellout audience with the Dalai Lama in Geelong will be able to download a podcast of his address and blessing at the Arena through the internet.

Geelong community radio 94.7 The Pulse has posted a recording  on its homepage at www.947thepulse.com.