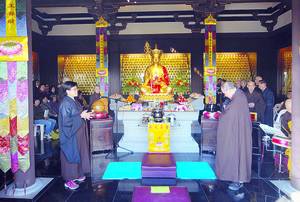 The Hungry Ghost Festival is a traditional Buddhist ceremony held annually on the seventh month of the lunar calendar.

The belief is that the festival is held when spirits come to Earth from above, living Buddhists offer prayers, chants, food and burn incense to satisfy ghosts and attract good fortune.

The festival was held at the Springvale Botanical Cemetery on Sunday at the Song He Yuan remembrance shrine.

Springvale Botanical Cemetery CEO Russ Allison said that the Hungry Ghost Festival was celebrated widely in China, Taiwan, Hong Kong and other parts of south-east Asia, but that Springvale was the only place in Australia where a ceremony was held.

“Participants had the opportunity to repay their debt of gratitude to their departed parents, relatives and ancestors, and resolve any animosity between enemies which improves karma and good fortune,” he said.