Melbourne, Australia -- ON THE dry plains north of Melbourne Airport sit the whitewashed buildings of the Tibetan Buddhist Society. 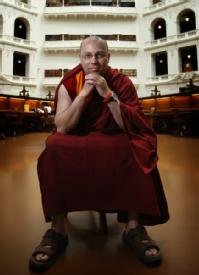 << Loden Jinpa at the State Library, where he is doing research for his PhD. Photo: Justin McManus

Loden Jinpa, one of a handful of Buddhist monks and nuns who live on the property, has just begun a PhD in philosophy and spends his days researching at the State Library or reading ancient Tibetan texts.

But, unlike most doctoral students, Mr Jinpa has never done undergraduate study and was admitted to the PhD only after he managed to write an honours thesis in eight weeks — a task that takes most students 10 months.

Mr Jinpa, 40, said he came from a "typical" Australian family where life revolved around football, and went to Ivanhoe Grammar.

He "slipped" into Buddhism at the age of 25 after reading a friend's book on the subject, and describes it as a philosophy rather than a religion.

After spending a number of years as a monk, Mr Jinpa wanted to "give back" to the community and — "rather naively" — emailed university philosophy departments to ask whether he could undertake a study of philosophy.

After several knockbacks, eventually the philosophy department at the University of Tasmania expressed interest. It told the eager monk he had to write an honours thesis to prove his mettle — and two months and 12,000 words later he was admitted to a PhD program, which he will undertake by distance education.

Mr Jinpa said Buddhism, which has a long tradition of philosophy, lent itself well to academic rigour: "Buddha taught that you should not just believe what you are told, it's incumbent on you to prove that it is actually true."

His doctoral thesis will examine if it is possible to obtain enlightenment — and, if so, how. "I see it as 'fusion' philosophy, that draws on biology, philosophy, and neuroscience to establish how the mind works, and what causes dysfunctional states of mind."

His thesis will also tackle what is known as "the hard problem" in Western philosophy: if consciousness is a property of the brain, how do we have a subjective experience of it?

Mr Jinpa has previously worked as an IT consultant and says Buddhism is more of a lifestyle than a vocation for many Australian monks and nuns, who often have to work to support their calling.

"My neighbour is a pig farmer; if we turned up with a begging bowl I don't think we'd get too far," he said.

When Mr Jinpa finishes his PhD he hopes to establish a Buddhist study program at Melbourne University and set up an exchange program with the Central Institute of Tibetan Studies in India, a university established by the Dalai Lama.
TOP