Adelaide, Australia -- AN imposing 35m high pagoda and 18m bronze Buddha statue are one step closer to being built on an idyllic beach setting at Sellicks Hill. 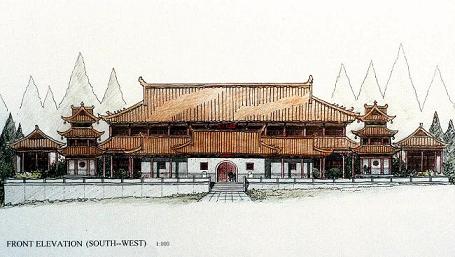 Residents have been quiet on the proposed development, but community leaders expect concerns to be raised now that the project is progressing.

The two symbolic structures will be part of a $15 million Buddhist temple development on a 55ha site between Main South Rd and the coast that also includes four shrines, accommodation for resident masters, retirement accommodation and public Chinese Memorial Gardens.

The development for Nan Hai Pu Tuo Temple of Australia Inc was designed to meet feng shui principles and to be environmentally sustainable.

Yankalilla mayor Peter Whitford said the general feeling in the area was that people were not upset about the development but he expected people in the Aldinga and Sellicks areas would have a problem with it.

"We agree they're decent people and would rather have them there than a bikie fortress," he said. "It's always been a bit of a controversial issue ... I think there will be a bit of reaction to it."

Onkaparinga ward councillor for the Wine Coast area, George Apap, said he had only heard a few comments about the project recently but they were generally against it.

The proposed development was first lodged in 1997 and divided the local community but was withdrawn the following year.

In 2008, it was declared a major project by Planning Minister Paul Holloway.

The Development Assessment Commission later determined a Development Report was required to identify issues including environmental impact, design and visual amenity. The report in now complete and the public is invited to make submission until the consultation period ends on November 8.

The temple's spokesman Lee Chew said the temple had much to offer the local community.

"We hope that people will accept the project as one that would benefit the state, the community in that area and attract tourism," he said.

"This temple can be an education centre for students of religious studies and educate anyone about the practice of Buddhism and Chinese culture."

Mr Chew said it would also act as a place where migrants could go to speak to a religious leader for confidential advice.