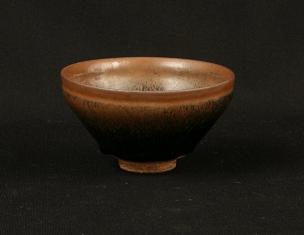 << This tea bowl was made in China during the Song dynasty (960-1279) of stoneware. These bowls with the subdued colors preferred for the tea ceremony were produced mainly for export to Japan. The bowl is part of a new exhibit opening at the Frank H. McClung Museum called "Zen Buddhism and the Arts of Japan."

"Zen Buddhism and the Arts of Japan" is at the museum, located at 1327 Circle Park Drive on the UT campus, through Dec. 31.

The display includes such objects as tea bowls, robes, bronze memorial plaques and a wooden sculpture of the guardian figure called Fudo Myoo. "Zen Buddhism" also shows more than 40 hanging scrolls whose paintings and calligraphy were created by Zen Buddhist monks from 1600 to 1868.

The beliefs and practices of Zen Buddhists were the motivation for the works of art. The items were used by those who practiced the religion and also reflected aspects of it.

Zen is one of many schools of Buddhism, the religion founded more than 2,000 years ago by Siddhartha Gautama, commonly known as the Buddha.

The tea bowls and other objects used in the tea ceremony are loaned to the exhibit from the Morikami Museum and Gardens in Delray Beach, Fla. The tea ceremony is a Zen ritual.

Other objects in the exhibit, including the scrolls, are from the collection of Dr. John Fong, a retired Boston physician and the exhibit curator.

"Zen Buddhism and the Arts of Japan" also includes a small meditation rock garden constructed by the museum.

Zen art is known for its elegant simplicity. Many of the paintings and calligraphies in the exhibit are done in black ink on white silk or paper. 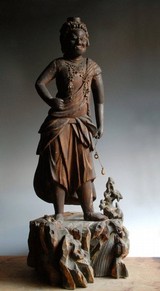 This 35-inch wooden statue is of Fudo Myoo, the "Brilliant King Immovable." The statue held a sword in his right hand to cut through ignorance and a rope in his left hand to subdue demons. He stands on a rock, representing his steadfast nature. Statues of the guardian of Buddhist teachings were enshrined in temples. This painting on a hanging silk scroll was done of an unidentified Obaku monk. Such portraits hung in the halls of monasteries. This one is from the 18th or 19th century.   >>

The images were created, the museum says in information about the exhibit, as expressions of enlightenment. The works also were considered forms of meditation as they were created and objects of meditation after they were finished. Their artists were Zen masters who were teachers and often abbots of monasteries.

The museum hosts special events in conjunction with the exhibit. Dr. Megan Bryson, a UT religious studies professor and the exhibit's associate curator, speaks on "From Zen Art to Zen and the Art of Motorcycle Maintenance" at 2 p.m. Sept. 23. Her talk will look at what aspects are related to Zen Buddhism and what is just part of the popular culture. On Oct. 28, the museum will host a 1:30 p.m. demonstration of Japanese flower arranging as well as a 3:30 p.m. Zen tea ceremony.

The exhibit and the events are free.

Buddhism spread from India to China. According to Zen legend, the Indian monk Bodhidharma introduced a new school of Buddhism to China between 420 and 589. That form of the religion was called Chan in China and Zen in Japan, where it became the dominant form of Buddhism by the twelfth century. Seated meditation or zazen is the core practice of Zen Buddhism.

Zen Buddhism and the Arts of Japan

- What: Exhibit focusing on art,rituals, meanings of works related to Zen Buddhism