Phuket, Thailand -- Art inspired by Buddhism abounds across Phuket, and some fine examples can be found and purchased here, notably in the art galleries of Phang Nga Road, Phuket Town. 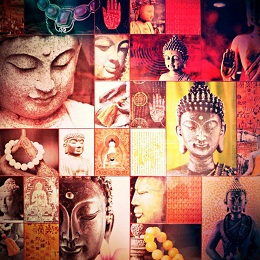 Art inspired by Buddhism abounds across Phuket, and some fine examples can be found and purchased here, notably in the art galleries of Phang Nga Road, Phuket Town.
Art forms originating from the belief system developed on the Indian subcontinent following the historical life of Siddhartha Gautama, around 2,600 years ago, and thereafter evolved by contact with other cultures as it spread throughout the continent of Asia.

Buddhist art followed believers as the faith spread, adapted, and evolved in each new host territory.
From the 1st to the 7th centuries, Buddhist art in Thailand was greatly influenced by direct contact with Indian traders as well as the expansion of the Mon kingdom, leading to the creation of Hindu and Buddhist art inspired from the Gupta tradition, with many monumental statues of great virtuosity build across what is present-day Thailand.

From the 9th century, Thai art fell under the influence of Khmer art in the north and Sri Vijayaart motifs in the south, both of Mahayana faith.
During this time, Buddhist art was notable for its elegant fluidity, fondness for multiple creations of Bodhisattvas.

From the 13th century, Theravada Buddhism was introduced from Sri Lanka around the same time as the ethnic Thai kingdom of Sukhothai was established. The new faith inspired highly stylized images in Thai Buddhism, with sometimes highly geometrical and almost abstract figures.

During the Ayutthaya period (14th-18th centuries), the Buddha came to be represented in a more lavish manner with sumptuous garments and jeweled ornamentation. And many Thai sculptures and temples tended to be gilded.
Today’s Thai Buddhist art draws on all of this rich and wonderful legacy.