Transience in art and life

Tokyo, Japan -- One reason the Sistine Chapel in Rome is so venerated is that it represents one of the occasions when art did not lose out to religion when the two came together.

Though religious constraints sometimes force artists to rise to the occasion -- as with Islamic art in which rich Arabesque patterns replace the outlawed depictions of the human form -- often these two expressions of the human spirit are at loggerheads.

Witness the early Christians who willfully destroyed much of Greek and Roman classical art. 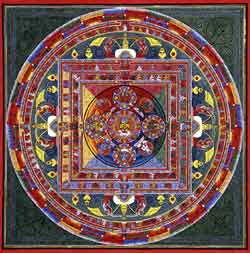 But religion is much like art in that it can change the way reality is viewed -- as the latest exhibition at the Museum of Modern Art Saitama makes clear.

"Mandalas: Deities of Tibetan and Nepalese Buddhism" may seem a strange exhibition for a modern art museum, but as curator Hisako Okoshi explains, just because the style is ancient, doesn't mean the art is. "We decided to hold this exhibition here because the art is not old," Okoshi says. "We see it as something with contemporary relevance."

In Buddhist practice, each mandala is thought of as a sacred "mansion," the home of a particular deity, that embodies a pure expression of the Buddha's fully enlightened mind, such as compassion and bliss. Though it's unlikely that the mandala have this meaning for Japanese youth, Okoshi sees their influence more as a stylistic or cultural reference permeating youth fashion, comic art and computer-game design.

Most of the pieces are 20th-century items from the Osaka-based National Museum of Ethnology. Despite their recent provenance, it is impossible to find a hint of modernity in formal or thematic terms. An impressive statue of the demoness Yogini, who found her way into Buddhist mythology from Hinduism, wears a necklace of skulls, tramples on two prostrate human figures, and drinks blood from a skull, an image that would seem jarring in a contemporary work of religious art. 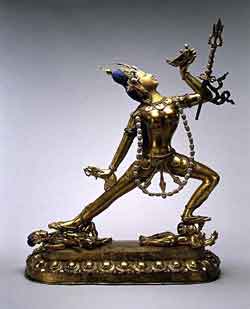 "The reason it's so timeless is because everything that is painted is scripted, written down in the Buddhist holy books," Okoshi says. "The painting or statue is not the artist's work. There is no room for individual expression."

By suppressing the individual in this way, the Buddhist view of art seems to be at odds with most other interpretations. The impression is reinforced by the Tibetan Buddhist monks from the Shelkar Choedhey Monastery, now based in Nepal due to religious persecution in China.

The six shaven-headed monks, dressed in saffron-colored robes, are celebrating the opening by making a sand mandala. The process is lengthy and painstaking. The sand, ground from various rare and precious rocks, is placed in a pewter horn with a small aperture, with the grains released by tapping on the horn.

Tenzin Dogon, a cheerful, smiling monk in his 30s, explains the connect-the-dots and color-by-numbers attitude that drives the monks in their work, and influences how they paint. "The important thing is not to paint well," he says through a translator, "but to make the line, and to measure correctly, to separate the spaces. The color is the most important because the color has meaning."

Although there are a few varieties, the basic forms of the mandala do not change. Most are geometric arrangements of circles within squares within circles. This formal space is then filled with rich patterns and minute depictions of deities. Although most people now see mandalas as two-dimensional works, the originals were three-dimensional models of the Buddhist universe, with the Buddha's palace at the top and the various realms of the cosmos -- Earth, Water, Fire, and Wind -- stacked up on top of each other.

The view you see in painted mandalas is a bird's-eye one of this structure, something that is made clear by a three-dimensional model which allows visitors to look down from above. This is why in a mandala picture the Buddha is always placed in the center of the picture rather than at the top.

Putting mandalas in a museum inevitably makes people think of them as art. Viewed as such they clearly have their drawbacks. While there is a great wealth of fascinating detail, compared with premodern Western art, they tend to lack overall visual unity.

Because symbolism and tradition play such a dominant role, from a purely aesthetic point of view, the colors seem random and the shapes arbitrary and unrelated. Any unity that the painting has comes from its rigid geometric structure. 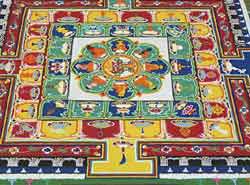 << News photo
Buddhist monks from the Shelkar Choedhey Monastery created this sand mandala to celebrate the opening of the exhibition "Mandalas: Deities of Tibetan and Nepalese Buddhism."

Because of these factors, it is difficult to enjoy them as you would an Italian Renaissance painting. Instead I was drawn to contemplate separate details.

"Of course, it's not a painting," Okoshi comments. "It's a tool to enter the Buddhist world."

As the monks gently tap their horns and lay on details, some of them wear face masks to prevent their breath disturbing the grains.

"It looks like they are painting," Ikashi says, "but it is more like chanting." Although one has to respect their dedication, and that of the other artists at the exhibition, it is clear that in these works religion and art are not the equals they are in the frescoes of Michelangelo or other great art from the Renaissance. Instead, art is serving religion. Anyone who doubts this can go to the museum and look for the beautiful sand mandala. You won't find it -- it's been swept up and deposited in the Arakawa River, to remind us that all things -- art included -- are impermanent.