Tokyo, Japan -- Living in a land still largely covered with forest, it is not surprising that Japanese have a special reverence toward wood. We see this particularly in traditional architecture, where wood is not only chosen to reveal its best qualities, but is largely left unpainted so that its beauty improves with use and age. 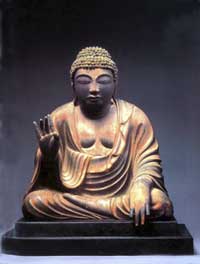 << Early Buddhist artists, working with techniques imported from China, created out of single blocks of wood masterpieces such as this Seated Miroku Nyorai (8th-9th c.) from Todaiji. Miroku Nyorai is said to be coming in the future to save the unenlightened. COURTESY OF TOKYO NATIONAL MUSEUM

Ichiboku -- carving from a single block of wood -- is thought to have developed in Japan under the instruction of the Chinese priest Jian Zhen (688-763) during the production of numerous images for the Toshodaiji Temple in Nara Prefecture. Ichiboku carving soon replaced the bronze, earthenware and lacquer that had been used to make earlier religious statues, and it became the dominant process for the manufacture of Buddhist images until the middle of the Heian Period (794-1185).

"Shaping Faith," an exhibition of ichiboku carving at the Tokyo National Museum Heisei-kan, displays the finest examples of the art form from the seventh until the 19th century, borrowed from temples around Japan. Most are of Bodhisattvas or various guardian deities who are usually trampling on some grimacing demon who dared to challenge Buddhist teachings.

The Japanese have believed since ancient times, as part of the Shinto religion, that spirits and gods are housed in trees and timber, as they are in all things. Looking at the fine examples shown in the first part of this exhibition, it seems that the divinity of the image is underscored with the power inherent in the material itself.

The earliest example is a small statue of the 11-Headed Kannon -- a Bodhisattva or enlightened deity -- that chooses to remain on Earth to help mortals on their own path to enlightenment, and symbolizes wisdom and compassion. It was finely carved from a block of tropical sandalwood and brought to Japan from Chang-An (present-day Xi'an), the capital of Tang-Dynasty China, by a member of a religious exchange mission.

Sandalwood was treasured for its fragrance and its dense, close grain, which makes it most suitable for detailed carving. The statue's face shows very Indian-looking features with large, hooded eyes and a prominent nose, and was modeled on statues brought to China from the subcontinent by Buddhist priests. Many similar images were subsequently made in the Nara area with gradually larger dimensions and faces that became more and more Japanese in appearance. There were almost no local supplies of sandalwood, so native camphor, and later kaya (Japanese yew) and other dense-grained woods, were used instead. 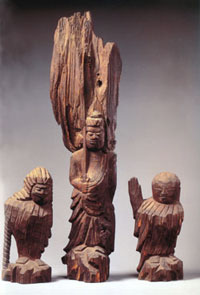 One Buddha from the Todaiji Temple in Nara is portrayed in one of his manifestations as the Miroku Nyorai -- the "Buddha of the Future." This seated image wears the simple robe of a monk and has the double-crowned head of tight curls that we associate with the enlightened. His face, however, is otherworldly, quite unlike that of any human, and reflects his special status as a messiah-like deity scheduled to return to Earth in the distant future to save any leftover sentient beings that haven't, by that time, achieved enlightenment.

During the Heian Period, an extraordinary sculptural departure from standard techniques appeared in areas remote at the time from the capital, such as the present-day prefectures of Toyama and Aichi. Many statues from these rural temples are characterized by having been finished with natabori -- chiseled, repeated hatchet marks -- horizontally aligned over the surface of the finished image. Apart from being strangely modern in appearance, an uncanny, lifelike effect is caused by the changing light as it falls on the multiple marks.

One of these hatchet-carved statues represents the Zen Priest Houshi, (Baozhi from China, circa 418-514), who is famed for his powers of transformation; his face is split vertically to reveal the emerging Kannon Bodhisattva. This is a truly haunting image, testimony to the deep faith, rich imagination and artistic skill of 11th-century woodcarvers and, by itself, more than worth a visit.

The last part of the exhibition is devoted to the works of the much later, Edo Period carvers, Enku (1632-95) and Mokujiki (1718-1810) that show a complete departure from any other religious imagery. The period saw the appearance of eccentric creativity in painting and calligraphy, perhaps inspired and protected by the vibrant merchant culture that was eclipsing that of the courtiers, warlords and samurai. With this background in mind it is easier to understand the emergence of these two unusual sculptors. 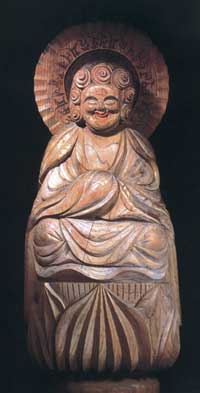 Enku traveled around the mountainous areas of central Japan as a pilgrim or wandering ascetic, carving for temples in exchange for food and lodging. His images were roughly hewn from whatever wood was available -- often splitting a log into three vertical sections to form the basic shape of each statue. Much of his carving approaches the abstract, with form being defined by rough ax strokes, and facial features of eyes, nose and mouth merely hinted at with hatchet marks. The details of hands and feet were often ignored, and all are executed in plain, unfinished wood.

Enku's works make no effort to hide that they are born of poverty. Yet they reflect a powerful spirituality on a human scale that simple rural folk would feel and understand.

Mokujiki, too, was a wandering hermit, but his works are markedly different from those of Enku in being clearly carved and well-finished. His sculptures are unique for the variety of faces he employed for depicting various deities, each rounded in shape, large-eyed, and mostly smiling or grimacing. The aloof serenity that we normally associate with Buddhist images is abandoned here for much more human expression. Though smoothly polished, the broad chisel marks are evident and devoid of surface color or gilding so that one feels their essential "woodiness."

An outstanding group of 33 figures from the Kokuriyama Mokujiki Kannondo Temple in Niigata show the large, central Nyoirin Kannon surrounded by smaller manifestations of the same deity. All have such expressive, almost cartoonlike faces that they might lead us to ponder where the roots of modern-day anime might lie.

All the images shown are of Buddhist figures -- except for a 10th-century statue of a seated male deity from the Futagami Imizu Shrine in Toyama Prefecture. This figure from the ancient, native Shinto pantheon exudes that profound respect for nature's mysteries so close to traditional Japanese rice-growing society -- and acutely felt even today. No wonder matsuri festivals are still boisterously celebrated all over Japan to invoke the benevolence of myriad local deities. The Japanese well sense the power and life force of trees that seem to be imbued in these statues, underscoring the teachings that they symbolize.