The art and collection of Ikuo Hirayama

Hokuto, Yamanashi Prefecture (Japan) -- Step off the train at Kai-Koizumi Station on the JR Koumi Line, which runs through the Yatsugatake Highlands resort area, and you will find yourself confronted with a surprisingly modern building. This, it turns out, is a museum dedicated to the world of Ikuo Hirayama, one of today's top Japanese-style painters, best known for his works related to Buddhism and the Silk Road. 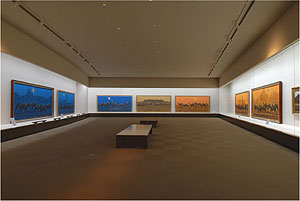 Opened in 2004, the Hirayama Ikuo Silk Road Museum exhibits the private collection built by the 76-year-old artist and his wife, Michiko, over the past four decades. Through visits to the ancient trade routes connecting East Asia and the Mediterranean, the couple have built up a collection of about 9,000 items, from drawings to sculptures and crafts.

Born in the Seto Inland Sea area of Hiroshima Prefecture, the young Hirayama took Buddhism as the main theme for his works, which eventually led him to develop an abiding fascination with the Silk Road--the route along which Buddhism was conveyed from its origins in India.

This was also the road traveled by Xuanzang (602-664), the Chinese priest who made a pilgrimage to India and brought back many holy scriptures. Fascinated in particular by the priest, Hirayama has made more than 140 trips to areas covered by the Silk Road.

Out of the Hirayamas' collection, the museum is now focusing on fabrics for its current special exhibition titled Dyes and Weaves of India, on through July 8.

On display are nearly 70 fabric works, the oldest of which date back to the 12th and 13th centuries. Among other colors, the exhibited works are notable for their many shades of red, as well as the gorgeous and intricate patterns created by dying and weaving.

One eye-catching example is Pichavai (20th century), a cloth created to hang in a Hindu temple. This spectacular picturelike work features a large tree at the center--symbolizing the Hindu god Krishna--and four women at its sides.

Fabric works are a key part of the Hirayamas' collection, according to Sakae Matsuyama, assistant manager at the museum. Fabrics are a particular favorite for Michiko, who serves as director of the museum and is herself an alumna of her husband's alma mater--what is now Tokyo National University of Fine Arts & Music--while Hirayama himself is more interested in gathering coins.

"Their collection gets high acclaim for the way it brings together various kinds of objects under the theme of the Silk Road," Matsuyama said. "They are interested in how cultures have been spread and changed [along the routes]."

Being held at the same time is a special exhibition called Drawing India, which displays 22 sketch books that Hirayama filled over two decades up to 1989. Depicted in black and color pencil, the sketches still look as fresh and vibrant as the day they were drawn. Among them, A Statue of Siva, India (1980) seems to have the power to soothe the soul of visitors, so gentle and uplifting is the smile on its face.

For the artist's fans, the clear lines and gentle tones of the sketches, which were completed in a short time, offer a new perspective on Hirayama's completed works.

As a permanent exhibition, the museum also displays some of the artist's works. Among the current featured items, two overwhelming examples are the pair Caravan through the Ruins of Loulan (2005), which depict caravans on camels in the desert in China viewed in sunlight and moonlight, respectively.

The works, 171 by 363 centimeters each, make a dramatic impression on visitors. Dominated by vivid orange and blue, respectively, the pigments seem thick and rich, while the outlines of the people and animals melt into the background slightly.

Another example is a byobu screen work titled The Return of the High Priests from India (1964), which depicts stooped priests walking into the sunlight--once again with blurred outlines. It is interesting to see another byobu screen work standing next to it, which shows sketches made for work depicting a group of priests walking. The lines used to depict the priests, who are walking in various poses, seem almost casual.

Most of Hirayama's sketches on display at Drawing India are being shown to the public for the first time.

"They're not usually shown because they're just halfway through the production process," Matsuyama said. However, "In Japanese-style paintings, it is said that it's the lines that count. So some students from Hirayama's alma mater have come all the way here to see these sketches."

Thinking about a location for their museum, the couple did not choose the artist's hometown--where there is already a museum dedicated to his paintings--or his current home in Kamakura, Kanagawa Prefecture. Instead they chose the Yatsugatake Highlands, partly because they knew the area through spending time at a relative's house there.

But locating it in this quiet resort town just makes it all the more inspiring to see Hirayama's works and collection, so far removed does it seem from the Silk Road.

Perhaps the highlight of all the sculptures currently on display is Seated Buddha from Gandhara, Pakistan (from the second to third century), which Hirayama fell in love with at first sight. The one-meter-tall work's ineffable expression--a slight but enigmatic smile--is one that is worth spending time with.

Dyes and Weaves of India/Drawing India
Until July 8, open 10 a.m.-5 p.m. Closed Tuesdays, except for July 3.

The Hirayama Ikuo Silk Road Museum, in Hokuto, Yamanashi Prefecture. The museum is just in front of Kai-Koizumi Station on the JR Koumi Line.