Boston, MA (USA) -- Patrons of the arts usually don't walk into a gallery and promptly plop themselves on the floor to meditate in front of the paintings. But then few galleries would advertise an exhibit as a "meditative shrine," as Gallery Anthony Curtis, near Boston's South Station, is doing with its "Buddha Room." 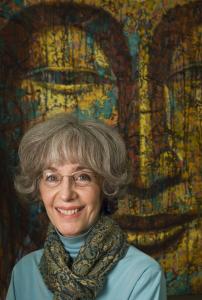 << Lowell artist Virginia Peck stood in front of one of her seven paintings in the "Buddha Room" at Gallery Anthony Curtis in Boston. They all feature the meditative face of the Buddha (WIQAN ANG FOR THE BOSTON GLOBE)

Seven paintings by Lowell artist Virginia Peck, all featuring the meditative face of the Buddha, line the walls. Meanwhile, antique artifacts from Asian Buddhist temples transport a visitor overseas while demonstrating the array of depictions of Buddhism's founder.

There's a wooden Laotian statue of a slender, linear Buddha, his helmeted head coming to a point, a far cry from the roly-poly image some non-Buddhists may have. His hands are outstretched as if to say, "Stop." The gesture, Laotians' traditional way of greeting each other, is also a peace sign, urging people to stop fighting, according to gallery co-owner Anthony Shu.

A small figurine from Myanmar depicts the Buddha with one hand touching the earth, a pose typical of Buddhas crafted in that country, Shu said.

The exhibit, which opened before Christmas and runs through Feb. 2, grew out of a successful show at the gallery last spring of Peck's work. The 56-year-old artist declines to call herself a Buddhist - "I'm not really big on categories" - but she meditates and does yoga at her home, where she has a small shrine with a Buddha sculpture and candles. She has been selling her paintings for a decade. Four years ago, she decided to focus on painting pictures of the Buddha.

"I'm a very spiritual person, and Buddhism speaks to me the most of the different religions," she said. "One day I was sitting in meditation, and all of sudden, the proverbial light bulb went off. I thought, 'I've always loved to paint the face, the human head. [I] could paint the face of the Buddha.' An electric shock just went through me. It was like I was being called. That's what I was meant to do. . . . I'm always struggling to find purpose and meaning in my life. It's not enough to just kind of go along."

Peck painted her works from sculptures and pictures of the Buddha, though you might think, looking at the portraits, one of which looks like a woman's face, that she used human models.

"Something that a lot of people tell me about my work is . . . I'm actually putting the spirit and the life into that face," she said. "The Buddha has been dead a long time, but his spirit is still living, still coming through, and can speak to us."

Standing in the room, a viewer feels the calmness of the painted faces. "What I'm usually trying to get across is love and peace and compassion and serenity," said Peck, "what Buddha was trying to get across. And the other thing that I'm trying to also say is that everything is in constant motion: the atoms [in our bodies] that are just frenetic, and our everyday life, which is just chaos."

She speaks in part from personal experience; her mother has Alzheimer's disease.

"But also, the image is saying within that [chaos] is the possibility for peace and tranquility," she said.

She conveys peace-within-motion with small slashes and splotches of paint in the faces.

"Her painting is actually done with very modern techniques," said Shu. "They're sort of patched with paint and color, but then the image emerges out of the painting. If you walk really close to the painting, the image disappears; you just see patches of color."

Back up, and it's the whole face that commands attention.

Peck's modernist approach appealed to Shu, who was born in China and reared in Buddhist culture. He said he and gallery co-owner Curtis Rudbart also showcase exhibits with non-New England themes - "We don't really show a lot of scenery or lighthouses." - and are responsible for the exhibit's artifacts, collected during the partners' trips to Southeast Asia. Peck's paintings start at $2,000, the artifacts at $1,000.

It was not coincidental that the exhibit was scheduled to run during the Christmas holidays and the post-Christmas comedown.

"The holiday season is very hectic," said Shu. "It kind of drives people crazy, in a way. And I think this can offer a good opportunity for people as a place to escape, to come and be quiet."