Amsterdam, Holland -- The Taliban's destruction of the giant Buddhas of Bamiyan in March 2001 was the most dramatic expression of their mission to obliterate all "idolatrous" images from Afghanistan's pre-Islamic past. 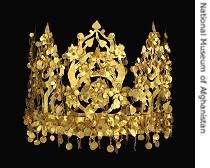 Along with the Buddhas, the Taliban destroyed 2,500 other cultural gems from Kabul's National Museum of Afghanistan. But thanks to the heroic efforts of the museum's curators, not all was destroyed. A traveling exhibit that recently opened in Amsterdam has brought some of what has survived under one roof. Lauren Comiteau visited the exhibit at Amsterdam's Nieuwe Kerk - or New Church - and files this report.

As one enters the Hidden Afghanistan exhibit, a banner headline reads: "A Nation Stays Alive When Its Culture Stays Alive." A glimpse of that culture - and how it survived invasion, civil war, and even the Taliban - is what this exhibit is all about.

"I believe this exhibit is going to go and show the world that Afghanistan is not what they hear in the West, that it's Taliban and war and this and that," says Omar Sultan, Afghanistan's Deputy Minister of Information and Culture. "But that we have a cultural heritage that is not only belong to Afghanistan but it belongs to the world."

That's because the world so often came to Afghanistan.

Marlies Kleiterp, the Nieuwe Kerk's head of exhibitions, explains that because Afghanistan was located on the trade routes between East and West, it has historically served as a crossroads of civilization.

"Because of that, local traditions mixed up with those from east and west that were brought in, and from north and south. I think the thing people recognize best was influence of the Greeks. Alexander the great in the 4th century B.C. conquered large part of Asia and ended up in this river. And also Afghanistan was part of his empire during that time," says Kleiterp.

Chinese pilgrims passed through this territory on their way to India. Afghanistan's location on the Silk Road brought Buddhism, which also flourished there. The rich legacy of art and culture were also influenced by the great civilizations of China, Egypt, Mesopotamia, Persia, the Indian subcontinent and Rome.

Khalid Siddiqi fled Afghanistan during the war and now studies in Amsterdam. He says the exhibit shows the "beautiful side of integration."

But Afghanistan's geography has also had its downside, witnessed in the years of strife that left the country's cultural heritage on the verge of extinction.

The Soviets invaded in 1979, and during the war that followed, many priceless works of art were plundered.

What remains from the National Museum's collection has survived civil war, a rocket attack, fire, a collapsed roof, snow, and the Taliban. That anything is left at all is in large part due to the efforts of Museum Director Omar Khan Massoudi and his staff. In 1988, they secretly moved the highlights of the collection to a vault in the Central Bank at the presidential palace.

"They put them in crates and put them in a special safe in the Presidential Palace and locked the safe with in fact seven keys," Marlies Kleiterp explains. "And the seven keys were given to seven different persons. And the idea was that nobody could come back and open the safe without any of the other keys. And in the end, they gathered together. Unfortunately, not all the keys were there, not all the keys survived, and so they had to use mechanical techniques to open the safe. But they did, they succeeded."

Massoudi risked his life to preserve his country's cultural heritage. He was one of the seven men who had keys to the vault. He came to the exhibit's Amsterdam opening, talking modestly of his role in saving his country's art.

"During the civil war these people knew about the transfer of these pieces and never gave any information to anybody," he said. "Luckily, they keep it secret. "

It wasn't until 2003, more than a year after the overthrow of the Taliban, that the Afghan government confirmed the existence of the treasures and restoration work began.

"One of the best pieces is this crown. Extraordinary," says Kleiterp. "You can see Indian, eastern influences."

For now, this traveling exhibit is the only way for Afghans to see the museum's collection. Afghanistan is still deemed too unstable for the art to go home, and the museum itself remains badly damaged. The exhibit's catalogue, though, has been translated into the Afghan languages, Dari and Pashto, and will be distributed to every school in the country. And, Deputy Minister Sultan says if his country's art can survive the Taliban, he has no doubts about its future.

"And if they could have saved it at that time, I promise you we can save it for as long as we are alive," he says.