Thangka - Buddhist art from the heart

Shanghai, China -- Exquisite Tibetan thangkas by a renowned old family of pious Lhasa painters are on display. Part of the sale proceeds will benefit an orphanage outside the capital of the Tibet Autonomous Region, writes Wang Jie. 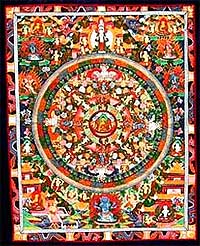 In painting a thangka, Tibetan Buddhist devotional art, a pious heart is said to be more important than technique because Buddha will inspire and guide the artist's hand.

A combination of extraordinary piety and skill are displayed in the 30 thangkas at Shanghai High Noon Art and Culture Center in Pudong.

All the works have been created by a famous - but not publicly identified - family in Lhasa that has been painting thangkas for centuries, says curator Zhang Xi.

The family supplied some of the painters who decorated the Potala Palace when it was built, he said, but did not say when. The original structure was built in the 7th century AD; it has been rebuilt and expanded over the centuries.

Some of the sale proceeds will be donated to an orphanage with 83 children, including a two-month-old baby, in the suburbs of Lhasa, according to the curator.

The scroll works, intended as aids to contemplation, are elaborate and intricate, using brilliant-colored natural mineral paints and gold powders. They depict Buddha and images from Tibetan Buddhism.

The art of thangka painting is believed to have originated in the 8th century AD. Thang, in the Tibetan language, means flat and ka means painting.

Thangkas are often painted banners hung in monasteries and behind family altars. They are carried by lamas in ceremonial processions.

"Thangka art reached a high level of sophistication in ancient times, but painters rarely received much payment because most of their works went to temples," says Zhang. "The painters wouldn't complain because of their piety. It was rewarding to paint all the tiny and intricate details on a Buddha."

The art form gradually lost its authenticity and much of its artistry and became highly commercialized. Popularity fell. Hence, the exhibition.

"The painter family prefers to keep a low profile, so they don't want their names revealed to the public," Zhang says. "But I can tell you one thing: Some of the family members painted the decorative works when the Potala Palace was built."

The family makes all the paints themselves from minerals, sometimes blending in Tibetan herbs to preserve the compounds and maintain the brightness of the colors, Zhang says.

"An authentic thangka is not complete unless it is prayed over by lamas and stamped with their finger prints, or the painter should chant over it while drawing," says the curator.

When you stand quietly in front of the works, he says, you can "feel the reverence from the heart of the painters. It is said that when one has the Buddha in his heart, he forgets about all technique and only paints what Buddha tells him."

Speaking of the orphanage, Zhang says it is private and financed mainly by revenues from a teahouse run by its director. As the orphanage has expanded, however, the funds are insufficient.