New York, USA -- The script is familiar but irresistible. A cache of art is stored, unexamined, in the bowels of an esteemed institution. Scholars become intrigued. Cataloging begins. The quality is unexpectedly high, and soon an exhibition materializes, accompanied by a catalog that illuminates the tale of neglect, renewed interest and diligent scholarship as well as the splendors of the art. 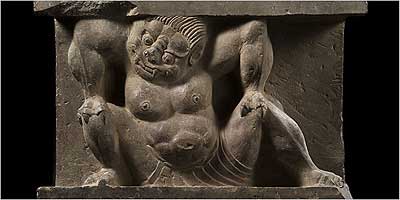 That is the plot for “Treasures Rediscovered: Chinese Stone Sculpture From the Sackler Collections at Columbia University,” an eye-opening show at the Miriam and Ira D. Wallach Gallery at Columbia University. Organized by Leopold Swergold, a collector who established a chair in Columbia’s department of art history and archaeology, and Eileen Hsiang-ling Hsu, an independent scholar, it presents 22 works of Chinese Buddhist sculpture. All were given to the university by Arthur M. Sackler around 1970 as part of a broader collection of 3,000 Asian objects, but they were not inventoried until Mr. Swergold was given permission to start sorting through them.

The delay is not unusual when it comes to Chinese Buddhist sculpture, a relatively young subject of art-historical study when measured against the centuries of attention lavished on Chinese painting and calligraphy. Of the nearly 30 books in Chinese and English in the catalog’s bibliography, three-quarters were published after 1982.

The display includes steles, Buddha heads, standing bodhisattvas, tomb doors, a large section of a mortuary bed and smaller icons. Their startling diversity makes the show feel much bigger than it is, and it reflects the unstable, culturally up-for-grabs phase of China’s history from the fall of the Han Dynasty in the early third century to the rise of the Tang in the early seventh century, sometimes likened to the Middle Ages in Europe.

Over those four centuries China was especially porous. Nomadic peoples from Inner Mongolia took turns invading and setting up kingdoms, sometimes being absorbed by local populations and sometimes being repulsed. Buddhism and its artistic styles, traveling along the Silk Road with monks from India and Central Asia, were part of that flux. The thirst for stone images of Buddha and bodhisattvas gave stone sculpture a boost, as did Indian traditions of carving figures and entire temples out of walls and caves of living rock.

If this sounds like a lot of complicated history, it is. But the good news is how you can see it play out in the shifting styles, techniques and levels of skill on display at this show. The carving alone ranges from fully in the round to deep relief to a shallow intaglio relief with fantastic incising of several kinds.

One of the oldest works, a rather primitive tomb door from the Eastern Han (25 to 220), shows a dragon chasing a bird above a wonderfully crude crowned mask; their smooth silhouettes are defined by a roughly chiseled corduroylike background whose parallel lines also bring to mind Jasper Johns’s crosshatch patterns.

A nearby Northern Wei funerary stele from the early sixth century provides a heady sense of competing cultural, religious and artistic impulses, including Buddhism’s early accommodation of Confucian traditions like ancestor worship. Near the top of one side, a small lone Buddha has a narrow perch; its size suggests “a somewhat ambivalent affiliation with Buddhism,” the catalog says. Above, the entwined bodies and legs of two ferocious dragons suggest a kind of reptilian thunder cloud; below, an expanse of calligraphy recites the genealogy of the couple who commissioned the stele in memory of a dead son.

The middle third of the stele’s other side is devoted to incised full-length portraits of parents, not unlike those of donors on a Renaissance altarpiece; below, things get much wilder in a scene of tumblers, acrobats and musicians, providing entertainment in the afterlife.

In a votive stele from the Eastern Wei dynasty (534 to 550), just a few decades later, Buddhism prevails. The Buddha is now large and majestic and flanked by two bodhisattvas. His robe is splendidly delineated in flowing horizontal lines that seem to merge with vertical lines behind him and with his halo; the skirtlike dhoti covering his legs flows in a series of broader parallel folds. His smoothly carved head, face and folded hands are still points in this energy field.

The sides and back of this stele are incised with scenes from his life. In one he sits meditating in a little cave, his tightly wrapped robe suggesting a fortune cookie while a forest of lotus and peony blossoms explodes overhead.

This exhibition brims with such telling comparisons. In the show’s largest gallery, a progression of five heads of bodhisattvas and disciples, thought to be from three different temple caves in northern China, proceeds from relatively small, rough and primitive (the Northern Wei, 386 to 533) to monumental, silken and sublimely subtle (the Northern Qi, 550 to 577). Also Northern Qi and similar to those prevalent in caves as pillar supports is a fearsome crouching monster, with demonic face and claws but the physique and loincloth of a Sumo wrestler.

Finally, a Tang mortuary tablet seals the impression of unity and refinement in its copious brocadelike relief. Among the profuse, nearly abstract cottony flowers are two realistic full-length portraits of palace retainers and, above them, two battling lions. The long and stable golden age of the Tang has begun.