New York, USA -- In West Bengal and Orissa in eastern India, palm-leaf paintings are common and cheap. Made from long, thin strips of dried leaves threaded together to fold up accordion-style, most have a single large image — of Ganesha, say, or Sarasvati, the goddess of books and knowledge — dashed off in fleet strokes. 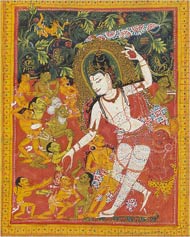 A sheet from the palm-leaf book “Ashtasahasrika Prajnaparamita” (“Perfection of Wisdom in 8,000 Verses”), includes a tiny painting of a female disciple playing a game with a bodhisattva, a being who embodies perfect wisdom and love. The religious books, which originated in northeastern India, are transcriptions of Buddhist scriptures, or sutras.

The pictures are turned out by the thousands for tourists and they make ideal souvenirs. Sturdy and compact, they weigh next to nothing. The collapsible format protects them from dirt and light. Toss a dozen paintings in your luggage and the problem of finding all-purpose gifts for the folks back home is solved.

Such practical features — size, resilience, portability — help explain why a similar form of palm-leaf art, the illustrated book, was popular in India between the 10th and 13th centuries. And they suggest why such books and their illustrations have survived into the present, while painting in more perishable media has not.

Even these books, though, are rarities. Of the huge numbers that must have once existed, only a fraction remain. And few of these are as finely done and pristinely preserved as the examples in the small show “Early Buddhist Manuscript Painting: The Palm-Leaf Tradition” in the South Asian galleries at the Metropolitan Museum of Art.

The earliest Buddhist palm-leaf books originated in northeastern India, in what is now Bihar; West Bengal; and Bangladesh. Their components were simple: talipot palm leaves — cut, boiled and dried — and a palette of organic pigments limited to red, yellow, blue, green, black and white.

The palm-leaf sheets varied in length, but were seldom more than a few inches wide. They were stacked like slats in Venetian blinds and bound by threads passed through two holes in the center of each sheet. Rather than forming a single surface, as in modern palm-leaf paintings, the sheets in books were meant to be seen one at a time.

The sequence for viewing them was determined by the flow of an inscribed text, which was punctuated with tiny paintings. The image of Maitreya, the Buddha of the future, accompanied by a female disciple on a leaf at the Met, is an example.

Just under three inches high, it’s packed with detail. Each figure is dressed, as if for a hot summer day, in beaded see-through attire. The disciple, her skin a mango gold, smiles up at her savior while he makes a coy gesture with his hands as if playing a game of shadow puppets for her amusement.

All the palm-leaf manuscripts we know of are religious books, transcriptions of Buddhist scriptures, or sutras. A few sutras were favorites, and by far the most frequently copied one was “Ashtasahasrika Prajnaparamita,” or “Perfection of Wisdom in 8,000 Verses.”

Said to have been written — or spoken — by the Buddha himself, it was more likely compiled over centuries. Like many texts generated by an ardently proselytizing faith, it simultaneously had its head in the clouds and was down to earth.

On the one hand, the sutra defines wisdom as a transcendent consciousness, a state of ego-erasure so profound that the reality of emptiness as the ultimate fact of life becomes clear. To reach this understanding was the goal of monastic practice. It was to gain Buddha-level knowledge, which was the knowledge you needed to gain before you could do the one thing worth doing, which was to help others in need.

Balanced against this high-minded goal was another. “Perfection of Wisdom” also implied that a smart devotee might use the sutra as a kind of existential survival kit, a magical talisman. With its help you could ward off illness, accidents and other material harm. And you could acquire things: money, a spouse, an extra cow, healthy children, and lots of them.

So palm-leaf manuscripts, like most art, had multiple uses. They circulated spiritual information. They functioned as protective charms. They served as religious offerings, gifts from which karmic returns were expected. And they became objects of worship.

Prajnaparamita was not only a form of wisdom, but also a female deity who had roots in ancient goddess worship and was identified with the Buddha’s mother. The sutra itself explains that if the Buddha is kind enough to give you a book like this, you should “revere, adore and worship it with flowers, incense, unguents, parasols, banners, bells, flags and rows of lamps all around.”
Such exalted copies of “Perfection of Wisdom” were doubtless lovingly preserved and pampered in temple treasuries or monastic libraries, though this did not guarantee their safety. When Muslim and Hindu raiders swept into northeastern India in the 12th century, they destroyed countless Buddhist foundations and burned their contents.

Fleeing monks carried at least some palm-leaf books — portability was a decisive factor here — to monasteries in Tibet and Nepal, where they remained until recent times. Few if any of the Buddhist palm-leaf manuscripts now in museums were actually found in India.

And a book could have a final use. It could be a personal possession; something to keep at home, carry around, examine up close whenever you pleased. That’s basically the experience offered by the scattering of palm-leaf pages at the Met, with their elegantly written texts and magnetic little pictures.

In one, Maitreya and his rapt companion play their childlike game. In another, the fiery Tantric goddess Kurukulla, red as a bloody thumbprint, dances a tarantella on the corpse of the god of desire. And in a third, an unnamed bodhisattva — Maitreya again? — distributes fruit to a mob of starving souls.

A bodhisattva is a being who has attained perfect wisdom, then added something to it: love. That’s why he’s here on the food line rather than off in heaven somewhere. The small figures swarming toward him hungrily reach for the fruit he offers, but they also stare with longing at his dancer’s figure and lamp-bright face.

It’s as if they couldn’t get enough of him, were afraid his generosity might end, afraid he might leave. He doesn’t return their gaze, though. He smiles to himself. He knows what they don’t know, what the words passed down on palm leaves teach: that wisdom and love are one and the same; that wise love is the love that stays; and that the hand is never empty that gives everything away.