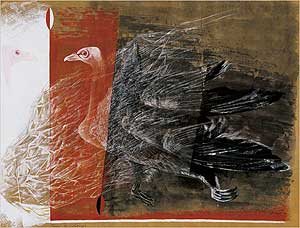 When I first saw the title, I thought: O.K., so we’re going to get Nature, cosmic consciousness and tons of Zen. All of which we do get, maybe too much, but we also get more, including enough revisionist thinking to muss up all standard accounts of 20th-century American art, always a worthy goal.

The strangeness starts with the look of the museum itself. It’s rare to see Frank Lloyd Wright’s pristine white spiral looking funky and unharmonious; but now, in a mild way it does, like a half-emptied attic or a convention hotel for mad scientists, poets and saints, with cluttered stretches and blank stretches and a few sculptures tossed here and here.

The first thing you see is a 1970 piece by the West Coast conceptualist Paul Kos: a circle of microphones clustered around a block of melting ice, picking up the sound of every crack and drip. Up the ramp is the famous ink and brush painting of a circle, triangle and square by Sengai Gibon (1750-1837). It’s a Zen Mona Lisa, on a rare loan from Japan.

And just beyond that is “The Death of James Lee Byars”: an open-front box, a kind of teahouse as wide as a two-car garage, lined with blazing gold leaf, with a bierlike platform inside. Mr. Byars, an American Buddhist dandy, long resident in Japan, made the piece when he was very much alive and sometimes lay on the bier “practicing death.” Now that he’s gone — he died in 1997 — five small crystals take his place.

The show finds the museum unusually full of sounds, however faint. Bells held in a kind of cage periodically sail down the spiral and ring. Synthesizers drone and vibrate away somewhere, and an amplified buzzing of bees has, when you get close, the roar of fighter planes.

Periodically parcels of books descend by pulley from on high, as part of an elaborate — overly elaborate — installation by Ann Hamilton. Lights flash in the dark; paintings all but disappear into walls. You catch glimpses of familiar artists — Franz Kline, Brice Marden, James McNeill Whistler — but also lots of strangers. Who’s that, and that, and that?

I initially found myself impatient with the show’s less than obvious thematic logic, and distracted by trying to sort out who was who, and where, and why. Then a bell rang and I thought: Never mind; read the wall texts, look around, go with the flow. And I did.

Part of the flow in this show, organized by Alexandra Munroe, the Guggenheim’s senior curator of Asian art, is history. And it helps to bring a little bit with you. It is useful, for example, to know that Asia made itself felt on American culture well before show’s 1860 start date. Already in the 1840s, Emerson was reading the Upanishads; and Thoreau, by his own account, knew more about Hindu, Chinese and Persian philosophy than he did about the Old Testament. In Asian scripture both men found a vision of nature and the divine as one, an ideal distilled by another New Englander, Emily Dickinson, in a kind of Transcendentalist haiku:

Asian influence seeped into American painting a bit later, after scholars like Ernest Fenollosa and artists like John La Farge visited Japan. In the show you can see the fashion for it catch on and spread, in Whistler’s inky 1870s nocturnes, in Arthur Wesley Dow’s turn-of-the-century Japanese-style prints, and in the spiritualizing work of artists who lived closer to Asia in the American Northwest: Morris Graves with his luminous images of birds and Chinese bronzes, Mark Tobey with his calligraphic “white writing.”

Tobey’s art is sometimes taken as a precursor of gestural abstraction in New York. And the case for linking some forms of Abstract Expressionism with Asian writing has been made and unmade many times. With its lineup of Pollocks, Motherwells and Klines the show pushes the argument forward again, though without adding anything startlingly new to it.

Instead its surprises come from the West Coast. There’s a gorgeous painting by Sam Francis, who lived for a while in Tokyo, of what looks like a lotus on fire. Lee Mullican’s “Evening Raga” has the note-by-note shimmer of Indian music. And his friend Gordon Onslow-Ford, a spiritual omnivore who painted on a ferryboat in Sausalito and wore “visionary” like a campaign button, offers a kind of abstract version of “Starry Night,” all filigree webs and wheels.

By the time this piece, “Round See,” was done in 1961, John Cage had been painting, composing and proselytizing his customized version of Zen for years. A section of the show is dedicated to him, or rather to a concept he embodied, one absolutely central to Asian culture: the idea of lineage, the transmission of forms and knowledge from mind to mind.

Cage developed his aesthetic of chance operation in part through study with the Zen scholar D. T. Suzuki, and shared what he learned with contemporaries like Robert Rauschenberg and Jasper Johns. A Rauschenberg combine called “Gold Standard” (1964) was slapped together in a matter of hours on a Tokyo stage as Cage watched.

But Cage’s creative DNA also passed on to a generation of younger, Zen-tinged, Neo-Dada artists who used the group name Fluxus. Work by several of them — Nam June Paik, Yoko Ono, Alison Knowles — is assembled near Cage’s, along with a ready-for-the-future-travel suitcase packed with Fluxiana.

Traditional Zen painting is black and white. By contrast, Tibetan Buddhist art comes in vivid colors, which made it naturally attractive to artists and writers taking drugs in the 1950s and 1960s. Some are indelibly identified as Beats. Jack Kerouac, with sketchy bodhisattvas and a manuscript slice of “Dharma Bums,” is one. So is William Burroughs, whose esoteric cut-and-paste work called “The Third Mind” gave the show its title.

Where an artist like Harry Smith fits in is harder to say. Chronologically he was a Beat. But his short animated films blending Tantrism, Theosophy, Orientalist Pop and Alastair Crowley, all to a cool jazz score, don’t feel period specific. They could be hippie ’60s. They could be by young artists today. (It’s important to note that the show barely touches on Islamic Asia, specifically on Sufism, in which Mr. Smith was interested.)

There are a number of free-radical types like him in the show, which is one reason it has a patchy, scrapbookish look. Even the section devoted to Minimalism resists the sort of uniformity that art history, ever straightening and cleaning, tries to impose.

Ms. Munroe finesses the problem by inventing a category she calls ecstatic minimalism, which covers expected figures like Robert Irwin, Ad Reinhardt and Richard Tuttle, but also admits personally expressive works like those of Agnes Martin and Yayoi Kusama, and makes room for excellent artists like Natvar Bhavsar , Zarina Hashmi and Tadaaki Kuwayama, so seldom seen in big mainstream shows that they’ve barely been slotted at all.

Into this charmed circle Ms. Munroe also brings abstract artists working with sound and light, like Jordan Belson, James Whitney and La Monte Young. Whether you call Mr. Belson and Mr. Whitney optical scientists or psychic magicians, they are fascinating figures, very much in line with the Guggenheim’s own history as a museum of non-objective art rooted in diverse cultural and spiritual traditions.

As for Mr. Young, he and his “Dream House,” with a 24/7 drone and trippy lighting by Marian Zazeela, have long since become underground institutions. First installed as a permanent environment in his Manhattan home in 1962, then used for performances with his teacher, the Hindustani raga vocalist Pandit Pran Nath, and now reconstituted at the Guggenheim, “Dream House” forms a natural bridge to the conceptual and performance art that brings the show to a close.

It is a disappointing close. The artists are impressive; the range of Asian reference supple and broad. But most of the work is visually spare-to-barely-there, and the pretentious exhibition design introduced at this point — tall, beetling dark-painted partition walls facing out into the ramp — squashes it.

A few pieces hold their own. Linda Montano’s haunting, chanted video tribute to her dead spouse works well. So does Mark Thompson’s video called “Immersion,” in which the artist, in an extreme Thoreauvian communion with nature, stands immobile as his head and bare torso are covered by swarming bees.

The prerequisite for Mr. Thompson’s art would seem to be a yogic capacity for endurance. And this might also apply to the work of Tehching Hsieh, known for his year-long performances. For the one documented here, he punched a time clock every hour, on the hour, every day from April 11, 1980, to April 11, 1981.

Mr. Hsieh came to New York from Taiwan as an illegal immigrant in 1974 and is having a well-earned big moment now, with a solo show at the Museum of Modern Art. He says that his performances are not about endurance, or discipline, or spiritual conditions but about everyday life, which is made up of repetitive patterns. He isolates one pattern and focuses on it. And like the bell sounding in the museum’s spiral, repetition turns in a kind of wake-up call: Pay attention to where you are, what you do, and what you are feeling right now.

Mr. Hsieh’s piece is one of the least obviously “Asian” works in the show, which raises the question of what Asian means in this context, and in a global present when Asia is no longer the exotic “other” that it was a century, or even a generation, ago. The exhibition doesn’t really deal with this. In fact the American take on Asia proposed here seems to have changed little, in its essentials, since the 19th century.

This may account for some of the strangeness the show projects. Both in the New York City present and in the art historical present it feels a little ghostly, like a sleeping beauty waiting for the kiss of life. Post-1989 art might provide that life, art from a time when Asian-American artists became, in a big way, the American artists contemplating Asia, and different perspectives kicked in. Still, the Guggenheim show is an event; and its strangeness, like its ambition, is both captivating and perplexing. Read the wall texts, look around, go with the flow.