Shooting in the dark 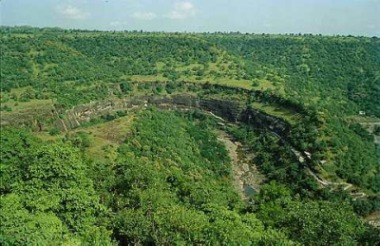 << From a distance: A bird’s eye view of India’s Ajanta Caves, rock-cut monuments housing paintings and sculptures considered to be masterpieces of both Buddhist religious art and universal pictorial art. – Pictures by Benoy K Behl

These photographs were hailed by experts all over the world as“the best depiction of the details and colours of the Ajanta paintings”. The art is said to rank among the world’s most important cultural treasures.

But after much thought, Behl realised the photographs could be improved upon. A year later, he returned to the caves for a reshoot of the mural paintings. “It is the second photography shoot of Ajanta which I now show to the world,” divulges Behl, 52, author of The Ajanta Caves, in an e-mail interview with StarTwo.

The Ajanta Caves, published by Thames and Hudson of London, features over 200 photographs. The American edition is published by Harry Abrams, New York.

“The Ajanta Caves is one of the most gorgeous and stimulating books of Indian art ever produced,” according to Andrew Robinson, literary editor of The Times, London.

Behl is said to have “made major breakthroughs in the photography of important and ancient paintings in the dark confines of caves and temples in India that were previously not photographed with accuracy.”

This was done with the development of a technique of photographing accurately in conditions of extremely low light.

Experts worldwide noted that this technique captures the colours and details more vividly than conventional photography with its use of strong lights.

Dr Sadashiv V. Gorakshkar, director of the Prince of Wales Museum of Western India in Bombay, feels that Behl’s Ajanta photographs “reveal a lot more than met the eye” and that his works “will compel a re-evaluation of the art and style of Ajanta paintings.”

The Ajanta Caves are rock-cut cave monuments, located in a wooded and rugged horseshoe-shaped ravine about 3.5km from Ajintha village in Aurangabad district, Maharashtra state, India,

The 29 caves, officially numbered by the Archaeological Survey of India and dating from the 2BC, contain paintings and sculptures considered to be masterpieces of both Buddhist religious art and universal pictorial art. 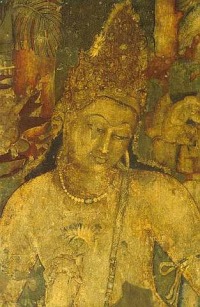 << Calm repose: Bodhisattva Padmapani or the Lotus Bearer in Cave 1, Ajanta, draws the beholder away from worldly attachments and confusion

Since 1983, the Ajanta Caves have been a Unesco World Heritage Site.

Behl regards the paintings of Ajanta as very special because “they enshrine a very compassionate world view.”

“It’s a vision which sees a oneness in the whole of creation: there’s the same essence in each of us, in the animals, the birds, the flowers, the trees, the leaves and even in the breeze which moves the leaves,” he says.

As Behl scrutinises the mural paintings, he not only admires the artist’s dedication to his art but feels as if the paintings were speaking to him. Behl was moved.

“Armed with the knowledge of the oneness in creation, the artist’s every painted figure and expression is filled with an essence of deep caring and compassion. It’s a great feeling of warmth and gentleness which reaches out from the many walls of the Ajanta caves and overwhelm you,” he says.

“The Bodhisattva Padmapani painted in Cave 1 of Ajanta is surely one of the most graceful paintings. Padmapani means Bearer of the Lotus and he brings before us the Peace of the Spirit.

“Around him are playful monkeys, birds and a kinnara (a paradigmatic lover, a celestial musician, half-human and half-bird in Buddhist and Hindu mythology) who sings. However, despite all these distractions, he looks within. It is this life within, the life of the spirit, which is the subject of all ancient Indic art.

“These paintings take you far from the attachments and confusion of the world around us, to a peaceful realm which can be found within. It is an inward look which is found on the faces of the Bodhisattvas of Ajanta.”

Behl first set foot in Ajanta in 1991 after acquiring permission from the Archaeological Survey of India (ASI) to photograph the murals.

He was granted approval easily because he had indicated that he would not be using a flash or any strong lights in his photography of the cave paintings.

The ASI also instructed a senior officer from its Aurangabad main office to go to Ajanta to oversee Behl’s photographic work to ensure that no flashlights were used.

Before Behl took on this challenge, he had developed the technique of low-light photography over a period of 10 years,

“Low-light photography is essentially a matter of very long exposures, going up to several minutes each. The camera has to be put on a tripod but what makes it a little difficult are two problems,” he explains.

“The first is how to measure the very low quantity of ambient light.

This comes through a great deal of experience and initial trial and error.

“The second problem is that, beyond a few seconds of exposure, a failure of the reciprocity of the film occurs. This means that further light which impinges upon the film does not produce the same amount of density as previous amounts of light. To judge how much compensation is required for a particular film emulsion, at any duration of exposure, you have to patiently try it out and take note of the results.”

Low levels of light (for example in the cave) is often casually called darkness, he says. It is not true or total darkness. The source of light inside many of the caves is from the partially blocked doorway.

In 2001, after scanning some of the selected Ajanta paintings, Behl carried out digital restoration. However, he says that nowadays he would never use any of the restored paintings.

“Even the most minimal attempt to restore any broken line or faded section, cannot hope to capture the original quality of the art. After all, it is this original grace which makes art what it is and makes each work of art unique,” muses Behl. “I am against restoration of works of art. Conservation and cleaning of the works of art should be carried out as required, but not restoration.”

Other than Ajanta Caves, Behl identifies the remote Sittanavassal in Tamil Nadu as another place where there are very beautiful cave paintings. The paintings are found in Jaina Caves and the ceiling of one of the caves has a painting of a lotus pond.

“It’s a scene of the faithful gathering lotus blooms to place on the memorial of a Jaina saint. It’s a sublime depiction and the faces of the figures carry the gentlest expressions. The lotuses are made as large as the human figures and with a reverential touch of the artist’s hand. The waters of the pond abound in fish and geese. It is a magical depiction.”

The caves in Ajanta were excavated during the rule of Hindu rulers who allowed Buddhism to flourish.

It is said that the monastic complex of Ajanta comprises several viharas (monastic halls of residence) and chaitya-grihas (stupa monument halls) cut into the mountain scarp in two phases.

The Ajanta Cave paintings are all over the cave except on the floor.

At various places, the artwork has become eroded due to decay and human interference. Many areas of the painted walls, ceilings, and pillars are fragmented.

The painted narratives of the Jataka tales (tales of previous incarnations of Buddha) are depicted only on the walls. They are about the Buddha’s teachings and life through successive births.

For quite some time, the artworks were erroneously alluded to as frescoes but they are actually murals. Also, the unique Ajanta murals are unlike any other in the art history of other civilisations.

The process of painting involved several stages. The first step was to chisel the rock surface to make it rough enough to hold the plaster (of clay, hay, dung and lime). After the plaster had dried, the drawings were done and the colours applied.

Various types of stones, minerals, and plants were used in combinations for different “earth” or “vegetable” colours. Sculptures were often covered with stucco (a mixture of of lime and powdered seashell or conch) to give them a fine finish and lustrous polish.

In the spring of 1819, a group of British soldiers chanced upon the caves. A British officer in the Madras army entered the steep gorge on the trail of a tiger. Deep within the tangled undergrowth, he came across the almost hidden entrance to one of the caves.

To read more about Benoy K Behl and his works, go to www.benoykbehl.com.