Auckland, New Zealand -- A renowned Burmese Buddhist leader says the situation in Burma has worsened since September when the military gunned monks down in the streets. 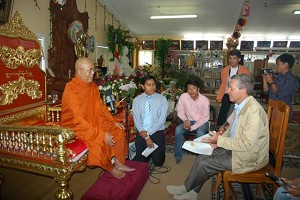 As the world's eyes are directed towards Tibet, Venerable Sayadaw U Pannya Vasma is appealing for help from the New Zealand government and the international community to help stop years of violence in Burma.

As with the Tibetan situation, the Chinese Communist Party is involved. The regime has been bankrolling Burma's military junta and providing weapons.

The 83-year-old abbot said many monks and students have been forced to the borders of Thailand and Malaysia to evade arrest and persecution for their participation in the peaceful protests.

"Seventy percent [of Burmese monks] are attacked, only 30 percent are left."

"Many monks have died. Shot dead or injury, as well as some people I know died secretly, maybe at night time, nobody knows who has been cremated. So some monks are tortured...many monks. Some monks they have been sent to concentration camps," he said.

He met with Green Party MP Keith Locke at the Ratanadipa Buddhist Temple in Auckland on Friday. Mr Locke told him he has been calling on the Government to restrict New Zealanders from investing within Burma; placing import sanctions on Burmese goods -particularly timber and gem stones; and the freezing of assets owned by the Burmese regime within New Zealand.

Mr Locke told Mr Vamsa of his concern over the Government's plan to sign a free trade agreement with China on April 17.

"At least the signing should be postponed while the people are being so badly treated in Burma and Tibet," he said.

Mr Vamsa said the military regime in Burma is still looking to arrest anyone involved in the protests last year, and for this reason there are no monks in the temples in Burma.

He has asked the New Zealand Government to fund a Burma Democracy Fund similar to the Zimbabwe Democracy fund established in Australia.

He is also calling for New Zealand's Embassy in Thailand to meet regularly with Aung San Suu Kyi, the leader of the National League for Democracy.

She has spent 11 of the past 18 years in Burma and is internationally recognized for her work to bring democracy to Burma.