Dunedin, New Zealand -- To give the teachings of the Buddha is the most precious gift a Buddhist can offer. 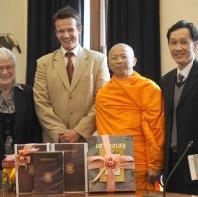 << University of Otago librarian Sue Pharo (left), Theology and Religion lecturers Dr Will Sweetman (second from left) and Dr Chaisit Suwan Varangkul (right) with a copy of the Tipitaka (Buddhist scriptures) presented to the University of Otago by Phra Palad Sudhammo (second from right), chairman and general secretary of the 60th Dhammachai Education Foundation of New Zealand and Australia. Photo by Peter McIntosh.

For that reason, staff at the University of Otago felt fortunate and thrilled to receive a copy of the Tipitaka (Buddhist scriptures) from the 60th Dhammachai Education Foundation of New Zealand and Australia on Thursday.

University theology and religion lecturer Dr Will Sweetman said the original Tipitaka is written in Pali, an Indian language related to Sanskrit, but the scriptures presented are in the language of three Theravada Buddhist majority countries - Thai, Burmese and Sinhala.

The 60th Dhammachai Education Foundation was established in 2004 to promote research into Buddhism, and in 1997 the University of Otago signed a memorandum of understanding with the Foundation to promote Buddhist studies.

Dr Sweetman said under the agreement, the Foundation sponsors two graduate students from Thailand each year to conduct research in Buddhism at the Theology and Religion Department.

"The gift of the Tipitaka marks a new phase in our relationship with the announcement that the Foundation will also support a visiting lecturer at Otago for three years."

Dr Sweetman said Dr Chaisit Suwan Varangkul had been selected for the position and will teach papers on Theravada and Mahayana Buddhism, and on the Sanskrit language.