Who can stem the tide of Buddhist supremacy in Myanmar?

Yangon, Myanmar -- The recent communal violence between Buddhists and Muslims in central Myanmar seems to be a result of the conflict which took place in Rakhine State last year. 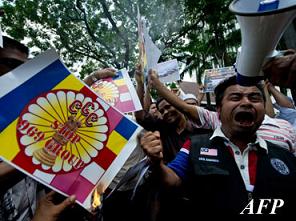 Muslims already feel threatened throughout the country and the tension has been building. However, there are more than two million Muslim people in Myanmar who have been living peacefully side-by-side with Buddhists in the country for generations.

It just needed a trigger like a brawl between the Muslim gold shop owner and Buddhist customers in Meiktila to flare up into serious inter-communal violence like it did. The devastating effect of this violence was many deaths, countless injured and the destruction of Muslim mosques and businesses.

Finally, the army stemmed the unrest in Meiktila. However, not before the violence spread to other towns nearby and then further south to the Bago Region, closer to Yangon.

What is most alarming is the organized nature of these Buddhist zealots who travelled to different towns and villages in groups on motorcycles. There, in the dead of night, they set fires to mosques and Muslim-owned businesses.

The initial violence in Meiktila could have been mass-hysteria, but the relentless destruction of Muslim homes, mosques and businesses in different towns and villages seems to be a concerted attack by zealots fired up by a Buddhist clergy preaching a mix of religion and nationalism. The sheer ferocity of the attacks and destruction is alarming.

One hopes that this trend is stopped before it spreads across the nation and grows into a “Buddhist Supremacy” movement.

Although Muslims comprise of only four percent of the population, traditionally it was harder for Muslims to assimilate into the main Myanmar population due to the religion's strict marital codes that requires anybody who inter-married have to convert to Islam. This has always been a thorn in the side and a projected threat by the majority Buddhist society.

Other religious groups—Christians, Hindus and even Animists—have assimilated more easily as there are no strict marital codes like in Islam.

Buddhists and Muslims lived in peaceful co-existence for more than a century before the violence in Rakhine State left most Muslims in Myanmar feeling threatened.

This inter-communal strife must be stopped at this juncture through concerted measures by the government, inter-faith religious leaders, Buddhist Sangha Councils, politicians, civic society groups. Not to do so may allow these zealots to morph into something like the White Supremacists who launched attacks against the black minority in the USA.

The American case is similar to the phenomenon taking place in Myanmar but in a different form. It is Buddhism mixed with nationalism, which is proving to be a dangerous and explosive combination.

Current unrest can be contained through the law, but these zealots are not going to go away overnight—especially when 969 Buddhist monks are preaching against the Muslim minority. It seems that this is the most dangerous source of this anger and violence. Why is the Supreme Sangha Council doing nothing to reign in these wayward monks?

President Thein Sein came out fairly strongly in his speech to the nation—this is what the people on both sides need to hear.

There are also some interfaith dialogues being held at the Myanmar Peace Center, chaired by Minister Aung Min.

Mandalay held an interfaith vigil; the National League for Democracy (NLD) in places like Taunggyi is spearheading the formation of committees to assure stability in the region; and the 88 Generation leaders are forming civic society and interfaith groups.

But why is Aung San Suu Kyi not speaking up? Is she going to stay silent like during the Rohingya and Kachin issues? Where is she in the battle to stem this tide of hatred?

She should at least appeal to the wayward monks to separate Buddhism and nationalism. She is a national hero to both the clergy and the Myanmar population. Here is the perfect chance for her to mediate and try to resolve the situation. Otherwise she may find that she will inherit a huge mess if the NLD wins in 2015.

The whole nation needs to be vigilant and create a safe atmosphere for both Buddhists and Muslims if Myanmar does not want to end up grappling with its own religious supremacists further terrorizing the minority Muslims.

-------------
Myat Thu Pan is an interested observer of the political, socioeconomic and crucial issues happening in present-day Myanmar.