HMAWBI, Myanmar -- A meeting of more than 200 Myanmar Buddhist monks on how to solve deadly communal conflicts that have pitted majority Buddhists against Muslims declared Friday they seek peace and accused the media of tarnishing their religion's image. 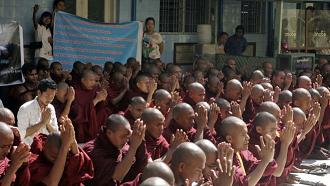 << Sectarian bloodshed mostly targeting Muslims has laid bare deep divides that were largely suppressed under decades of military rule which ended two years ago in the Buddhist-majority country.

A statement released at the end of the two-day meeting did not mention a prominent Buddhist monk's proposal that a law be enacted to regulate inter-religious marriages, particularly specifying that anyone who marries a Buddhist woman must convert to Buddhism.

The monk Wirathu, who is known for his anti-Muslim sermons, told reporters Thursday on the sidelines of the conference that he would propose the legislation to parliament.

Conference spokesman Dhammapiya, another monk, said the proposal was not directly related to the meeting.

"The draft law was proposed at the wrong place and caused confusion," he told The Associated Press.

The remarks had fueled unease that Buddhist monks are promoting religious intolerance. Wirathu is a key leader of "969," an ultra-nationalist movement of monks that preaches that the country's small Muslim minority threatens racial purity and national security.

The conflict has threatened to undermine the political and economic reforms undertaken by President Thein Sein, who came to power in 2011 after almost five decades of repressive military rule.

Sectarian violence began in western Rakhine state last year, when hundreds died in clashes between Buddhist and Muslims that drove about 140,000 people, mostly Muslims, from their homes. The violence had seemed confined to that region, but in late March, similar Buddhist-led violence swept the town of Meikthila in central Myanmar, killing at least 43 people.

Regarding the violence, Dhammapiya said that anyone who broke the law should be dealt with according to the law.

"We have to ascertain if the monks who took part in the violence were fake or genuine monks," he said. "It has to be investigated and there should be rule of law to stop the violence." News reports suggested that some monks were armed and encouraged the bloodletting.

Participants in the meeting, held at a monastery in Hmawbi, about 32 kilometers (20 miles) from Yangon, complained that the media had presented a distorted view of Buddhism's role in the violence.

Dhammapiya told reporters on Thursday that "We are just requesting you to write the news with the right information."

"There are many media that report ethically. But there are some which get backing from some sort of organizations," he said, without elaborating. "We feel that it's not balanced."