Yangon, Myanmar -- Bhante Ashin Nyanissara, commonly known as Sitagu Sayadaw, one of the most prominent Buddhist monks in Myanmar, has urged the government and the people to work together to safeguard the religion and the nationality in the country. 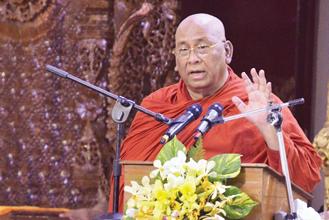 Speaking at a special ceremony held at Aung Sann Tet Monastery in Insein Ywama, Yangon on June 27, Sitagu said, “The objective is good enough. We need to choose a word wise enough to capture the whole process of protecting the country as well as safeguarding the religion and the nationality. In front of the respected monks here, I would like to announce to you [the monastery's head] that a leading committee will be formed, and its organizational rules, structure, and title will be decided soon. The unity is very important," said Sitagu Sayadaw.

He also urged the monks attending the ceremony to be patient, forgiving, and united in accord with the Buddha teachings regarding the current situations.

"I'd like to request from here to all people from different religions such as Buddhism, Islam, Hinduism, and Christianity not to turn small incident into a bigger one. The ones who take refuge under a tree should not destroy it. What should not be retaliated must not be exaggerated. The wild exaggeration is the main cause behind the destruction of peace and unity. Nowadays the incidents like those have happened often in our country. We all should not take part in those incidents. If we do, we will be the same as the Time Magazine's cover story accused [of the Buddhism]," he added.

He also said the Buddhist monks should be aware of those who are behind the recent incidents and to act wisely.

Support from those persons having international outlook and the law experts is essential for the Buddhist monks to be able to protect the nationality and the religion. The government and the people must also cooperate in it, Sitagu Sayadaw said.

He also questioned the coincidence of religious riots with the peace talks between the government and the ethnic groups. He believed this is an attempt to derail the government’s peace effort, and he urged his fellow monks not to become the tools of the riot-inciting people.

“In our noble country, while the government is trying to build national unity and reconciliation with ethnic peoples, I think incitements to religious riots have come about to disrupt the peace process. Don’t be moved by the incitements. Our monks, be cautious not to become the tools of inciting people,” Sitagu Sayadaw told an audience of over 1000 monks.

During the occasion, Sitagu Sayadaw also condemned the cover story of TIME magazine’s July issue, which referred to a senior Myanmar Buddhist monk with the title “The Face of Buddhist Terror”. He said he opposed all the contents of the story, and took a vote on his opinion. All of the monks joined him to condemn the TIME’s story.

In his conclusion, Sitagu Sayadaw repeated the importance of unity, forgiveness and patience among the Buddhist monks, the government, and the law experts to protect the nationality and the religion.