Protesters Attempt March from Mandalay to Copper Mine

Mandalay, Burma -- About 60 protesters on Sunday began a peaceful march from Mandalay to the controversial Letpadaung copper mining project in Sagaing Division, calling for the Chinese company developing the mine not to destroy an ancient religious building. 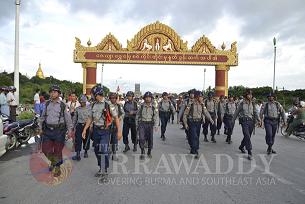 << Police intervene to try to stall a protest march as it begins in Mandalay on Sunday. (Photo: Tay Za Hlaing / The Irrawaddy)

The demonstrators on Monday agreed to cancel their march after authorities promised to meet their demands. But the agreement only came after a confrontation as the march began on Sunday.

About 100 police followed the protesters closely and briefly detained several people involved in walking to the mining site, which is about 95 miles by road.

The mostly female protesters, including five monks and activists, are from Letpadaung, Mandalay and Rangoon. They launched the march to demand protection for an ancient ordination hall and temple - established by an influential Buddhist monk, Letti Sayadaw - which is under threat of being destroyed to make way for the massive copper project.

On Sunday, the protesters had a verbal confrontation and minor clashes with police, after several of the marchers were detained. The protesters were soon released after negotiations.

Si Thu, one of the group's leaders, told Irrawaddy that the attempt to crackdown the peaceful march is against the freedom of expression.
dsc5027

"We are peacefully marching to ask them not to destroy the temple of Letti Sayardaw. We do nothing against the law."  He said.

"Trying to treat us brutally is shameful for the government as this shows we do not have freedom of expression while we are going on the path to democracy."

The protesters stayed at a Buddhist monastery in Sagaing on Sunday night and engaged in negotiations Monday morning.

On Monday, local authorities and representatives of the demonstrators, including monks, signed an agreement that the authorities would meet three demands of the protesters if they stop their march. Authorities pledged to ensure the hall is not destroyed, that none of the marchers will be prosecuted and that local residents in Latpadaung will be allowed to worship at the Buddhist temple.

The demonstrators were to be escorted back to their homes by police on Monday.

The Letpadaung copper mine is a multi-million dollar project by Chinese-backed Wanbao Mining Ltd in partnership with the Burmese military-backed Union of Myanmar Economic Holdings Ltd (UMEHL).

Operations were suspended at the US$600 million project in November after authorities violently cracked down on peaceful demonstrators opposed to its environmental and social impacts.

Following an investigation by a parliamentary committee, a new deal was announced in July with the government saying local communities would now benefit from the project. Under the new terms the government will take a 51 percent stake in the mine, which is expected to produce 40,000 tons of copper per month.