Yangon, Myanmar -- The most powerful political force in Myanmar's election has no candidates and will win no seats. But when the monks of the Ma Ba Tha speak, politicians listen. 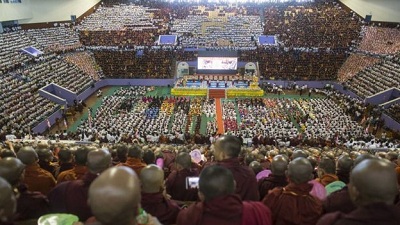 On Sunday the men in robes flexed their considerable political muscle.

Tens of thousands of Buddhist monks, nuns and supporters were at the biggest rally of the election campaign so far.

It had apparently taken an intervention by the president of Myanmar (also known as Burma) to secure the national indoor sports stadium in Yangon for the Ma Ba Tha. But it still wasn't big enough and thousands more watched on screens outside.

The rally in Yangon - also known as Rangoon - was the finale of a nationwide victory tour for the monks celebrating the passage of four bills through parliament.

The new laws were drafted and promoted by the Ma Ba Tha and place wide-ranging bureaucratic restrictions on family planning. Though the bills make no explicit mention of Islam, the monks have made no attempt to hide the intended target.

The laws are designed to stop Muslims having multiple wives, large families and marrying Buddhist women; to halt what a leading monk has called the Islamic "invasion" of Myanmar.

At the rally great efforts were made to show that the Ma Ba Tha is not just for the majority ethnic group, the Bamar. There were dancers from Kachin, Shan and Rakhine State and an excruciating parade of Kayan women, their necks elongated by metal coils. But no Muslims of course.

The dances over, the leader of the Ma Ba Tha addressed the crowd. His message was all about protecting and preserving the Buddhist nation from an unspecified but serious threat.

"These laws are needed by our country and our people and to protect them," Bhadanta Tilawka Bivamsa said. "We want to urge people to protect them and stay away from those who want to destroy them."

For those who found that too oblique, there are others within the Ma Ba Tha leadership willing to spell things out.

Mandalay monk Ashin Wirathu revels in his status as an outspoken firebrand. Granting interviews freely, he uses social media to spread often false stories about Muslims, regularly denigrating them in speeches as mad dogs and rapists.

Those that dare challenge Wirathu's view of events quickly become the target of his invective.

UN envoy Yanghee Lee was labelled a "whore" when she stood up for the rights of the Muslim Rohingya minority. Tellingly, when that happened not a single senior Burmese politician spoke out in her defence.

So has Wirathu been quietly shunned by the establishment? Not a bit of it.

U Tin Oo is 88 years old, and a former political prisoner and commander-in-chief of the Burmese army.

Now patron of the NLD, the video shows him kneeling at the feet of Wirathu and receiving a lecture on how the NLD should have prioritised winning the election over changing the constitution.

Reverence and respect to monks is an important part of Burmese culture. But you can choose who you see.

For the Ma Ba Tha, no target is off-limits. Earlier this year the monks waged a successful campaign to stop a luxury residential development near the Shwedagon Pagoda. Their opponents that time were the Burmese army, who owned the land and stood to make tens of millions of dollars from the deal.

As the monks' protests gathered momentum the army cancelled the project rather than risk further confrontation with the self-appointed defenders of Burmese Buddhism.

With each success their influence seems to grow. Many of the policies of Myanmar's major political parties now seem to be designed with the likely reaction of the Ma Ba Tha in mind.

During her years as a pro-democracy icon Ms Suu Kyi spoke frequently of "freedom from fear".

Her party, the NLD, is now running scared of the monks and doing everything they can to counter the suggestion that the they are a "pro-Muslim" party.

To emphasise the point, the NLD declined to name any Muslim candidates for the election. Unwilling - or perhaps unable - to justify the decision the Nobel Peace prize winner made a trusted lieutenant explain the decision.

"If we choose Muslim candidates, Ma Ba Tha points their fingers at us so we have to avoid it," Win Htein told UCA News.

Less surprisingly, the military-backed ruling party the USDP has done the same and also has no Muslim candidates.

Even those Muslims who have been nominated have had a tough time, with the Union Election Commission disqualifying many of the Muslim candidates on often spurious citizenship grounds.

The final tally, with a month to go, shows that out of more than 6,000 candidates in both national and regional elections, only 10 are thought to be Muslim.

Twice the Union Election Commission rejected him on the grounds that his parents were not born in colonial Burma. Eventually, having been confronted with irrefutable evidence that his grandfather, a Tamil Indian, had come to the country in 1900, they relented and he is now campaigning in Yangon.

A charismatic, constantly joking lawyer, he introduces his wife to me as "half Shan, half Taliban" (she has Punjabi Pathan ancestors).

She's heard the joke before and with a smile adds al-Qaeda and Islamic State to her "terrorist" ancestry.

"They don't want to accept Muslims in parliament," he told me. "They love everyone, even pigs and dogs, but they don't love Muslims. They hate Muslims."

I asked him how important he thinks the Ma Ba Tha have become.

"I think they are the teachers of the president," he says. "Why do they want to protect Buddhists? No-one attacked them. That is very strange for us."

The timing is certainly convenient. Many believe that the monks are being funded by those close to the ruling USDP.

The Ma Ba Tha's calls for the protection of Buddhism and Burmese identity mirror the oft-cited justification for the military's role in politics: to maintain unity and stability.

That view was given credence this week by Wirathu when he changed his Facebook profile picture to an image of Thein Sein with the words: "I'll be with you Mr President. You are ours."

Quite who controls who has yet to be fully established.
'Hated Muslims'

U Yan Naing is one of the survivors. Overlooked by the NLD as a candidate in his home village in the Irrawaddy Delta (because of his religion, he says) he joined the United National Congress, a Muslim party.