by Our Special Correspondent, The Buddhist Channel, April 7, 2016

Yangon, Myanmar -- Myanmar's retired junta General Thein Sein has become a monk. He has been ordained as U Thandi Dhamma. According to reliable sources, it was the well known Dhamma teacher Dr. Ashin Nyanissara or better known as Sitagu Sayadaw who implored him to take up monkhood. 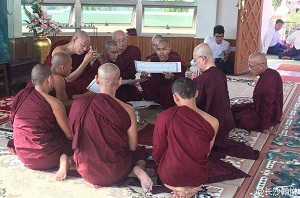 << Retired junta General and former President of Myanmar Thein Sein shown here undergoing ordination at Dhamma Dipati Monastery, near Pyin Oo Lwin. He is ordained as U Thandi Dhamma and will be a monk for 5 days

Thein Sein is widely regarded as the junta head who opened up Myanmar. After taking over from military dictator Senior General Than Shwe in 2011, he was expected to carry on as an opaque and isolationist ruler, much like his feared predecessor. After all, in 1998 he was personally named by the United Nations Special Rapporteur on human rights in Myanmar for directly ordering his soldiers to commit human rights abuses.

Records have indicated that his history in brutality was no less than previous junta heads, such as Ne Win and Than Shwe.

In 1988, as major of Light Infantry Division 55, he is thought to have played a role in the crushing of the democracy uprising on August 8. Thousands of students and activists were either massacred and arrested. Thousands more fled to neighboring countries. Student leaders and other activists were imprisoned for years and subjected to torture and abuses in prison. To date, no government officials were ever held accountable for abuses committed during the crackdown. Thein Sein was quoted to have said that the Myanmar Army ‘saved the nation’ by crushing the uprising.

From 1996 to 2001, Thein Sein held the position as Commander of the Triangle Region Military Command, based in Kyaingtong, Shan state. During this period the Swiss-run International Committee of the Red Cross (ICRC) accused government troops of committing repeated abuses against men, women and children living in communities affected by armed conflict along the Thai-Myanmar border.

Among the charges leveled by the ICRC is large-scale destruction of food supplies, numerous acts of violence against the local population, including murder, arbitrary arrest and detention. It says thousands have been forced to flee their homes.

As a member of the State Peace and Development Council since 1997, and Prime Minister from 2007-2011, for almost 15 years Thein Sein played a leading role in the dictatorship which ruled Burma. During this period, the United Nations has documented abuses taking place which may constitute war crimes and crimes against humanity, including enforced disappearances, forced displacements, forced labor, arbitrary detention, rape and other forms of sexual violence, torture and other forms of ill-treatment.

His period as acting Prime Minister of Myanmar from April 2007 - 24 October 2007 oversaw the cracking down of the "Saffron Revolution", pitting soldiers against monks. The crackdown saw junta security forces raiding monasteries across the country and arresting monks. The violence against the Sangha was unprecedented. Some even labeled it as the military's heavy karma (garuka-kamma, considered as the heaviest of evil karma) for manhandling and even killing of men in robes. On record, UN Human Rights Council's Special Rapporteur Paulo Sérgio Pinheiro said that independent sources reported 30 to 40 monks and 50 to 70 civilians were killed as well as 200 beaten.

From ruthless leader to reformer

Despite having been linked to such past atrocities, within a few months after taking helm of the country as President in 2011, Thein Sein confounded critics by implementing the biggest sweep of democratic reforms and economic changes ever witnessed in modern Myanmar.

Among the major initiatives taken under his Presidential term are:

As a result, China, Japan and some member countries of ASEAN increased their investments in the country, especially in resource rich areas, bringing in much needed economic development and employment opportunities.

In January 2012, President Obama of the United States restored full diplomatic relations, which was severed in 1990. Tourism has boomed, with tourists raring to visit one of the last parts of the earth which time have somewhat stood still.

So what has catalyzed the change? What made Thein Sein turned from a hard-liner, ruthless General to become Myanmar's Gorbachev?

In an interview with the New Yorker (Jan 14, 2012), Daw Ang Sang Suu Kyi revealed that the information revolution was a key factor which the military regime could not rein in.

"Opposition web sites, satellite television, Facebook, blogs, and DVDs smuggled in from abroad were drowning out junta propaganda and spreading both awareness of the dictatorship’s human rights abuses and a yearning for democracy," the Nobel laureate said.

There is also the 2 million strong overseas workers, bringing in hard earned foreign exchange from neighboring India, China, Thailand and Malaysia. They have seen enough what economic development and democracy can bring. With greater labor mobility within ASEAN, the junta's propaganda machinery have no answer to such openness and mass awareness.

His reform may also have been prompted as a pragmatic move to head off another pro-democracy uprising, since the Arab Spring turmoil of 2011 was beginning to spread around the world.

Thein Sein has shown his political nous to seize a historic moment as a reformer. His transformation from a hard headed army man to one who partially freed Myanmar from despotic, totalitarian military rule is stark and breathtaking. What more now, a monk (although for five days only).

Some say that his transformation mimics that of Angulimala, a ruthless serial killer who was redeemed by a sincere conversion of the Buddha. According to Buddhist scriptures (Angulimala Sutta, Majjhima Nikaya), Angulimala went on to become a monk, and before he died, attained the enlightenment of a Arahant.

As he spend his five days in the robes at Dhamma Dipati Monastery, near Pyin Oo Lwin, under his moniker U Thandi Dhamma, one wonders whether he is doing it as means to mend his legacy or to atone for something else. At this moment, we can say that Thein Sein has attained the "monkhood stage" of Angulimala.

To attain the "enlightenment stage" of Angulimala however, he has to work from behind to press for fuller and further reforms, while working through the eleven-man National Defense and Security Council, which is dominated by hard liners. The quasi democratic framework currently installed is still under the thumb of the military. It is neither enough nor sufficiently adequate to meet the demands of a free and progressive Myanmar.

The road ahead is still hard and bumpy. The future of Myanmar will be ascertained on several levels, which are: the treatment of resident aliens (such as the Rohingyas), what steps are taken to establish the rule of law and how much more freedom of information is allowed.

The years to come could determine whether the optimism unleashed by Thein Sein's reforms is justified or whether the momentum released will barely limp forward to become just a footnote in Myanmar’s tragic history.