Yangon, Myanmar -- A Senior Buddhist monk, Parmaukkha, a member of the central committee of the powerful ultranationalist Buddhist monk organization Ma Ba Tha, has stepped down over political differences with the group, RFA reported on 7 June. 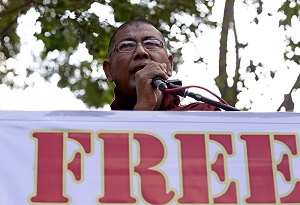 The group, also known as the Organization for the Protection of Race and Religion, has led demonstrations against members of Myanmar’s Muslim minority, backed the passage of controversial laws on race and religion,and advised citizens to vote for the Union Solidarity and Development Party (USDP) in last November’s national elections.

The organization passed out pamphlets during a conference it held, telling people to vote for the USDP in the elections, Parmaukkha told RFA, he said that he wanted Ma Ba Tha to stand free from party politics saying he didn’t agree with the group’s ‘attitudes’.
TOP