NAY PYI TAW, Myanmar -- Muslims make up just over two per cent of Myanmar's population, government census figures showed on Thursday (Jul 21), undercutting claims by Buddhist hardliners that Islam poses a threat to the dominance of their faith. 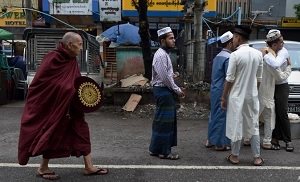 << A Buddhist monk (L) walks by Myanmar Muslims (R) greeting one another outside the Narsapuri mosque to mark Eid al-Fitr in Yangon on Jul 7, 2016 as the country's Muslims celebrate the end of the Islamic holy fasting month of Ramadan. (Photo: AFP/Romeo Gacad)

Full details from the 2014 count, the first of its kind in decades, was withheld for almost a year to avoid stirring tensions in the Buddhist-majority nation ahead of elections that propelled Aung San Suu Kyi's pro-democracy party to power.

Islamophobia has rippled across Myanmar in recent years, with Buddhist nationalists sending alarmist messages about the growth of the Muslim population.

But the new data affirms that Buddhists make up 90 per cent of the population of 51.48 million. They are followed in number by Christians (6.3 per cent) and Muslims (2.3 per cent or over 1.1 million people).

However, the survey does not include the one-million strong stateless Rohingya Muslim minority, who were banned from self-identifying during the census taking.

Added together, their number doubles the country's share of Muslims to around four per cent - an estimate that has been in circulation since the last census in 1983.

"Some were worried that there could be a significant difference in the numbers of each religion," Thein Swe, Minister of Labour, Immigration and Population told reporters in the capital Nay Pyi Taw as he released the data. "But there is not much difference when compared with the census data in 1983."

"It is time to replace speculation with fact," the UNFPA's Janet E Jackson said in a statement. But the UNFPA hit out at the Rohingya's exclusion from the data as "a serious shortcoming of the census and a grave human rights concern".

Some believe the figures may have been reduced to prevent reprisals against Muslims.

"It’s a big joke ... We would be not less than eight to 10 per cent," Al-Haj Aye Lwin, chief convener of the Islamic Centre of Myanmar, told Channel NewsAsia.

“To look at it from the brighter side, the nationalists will have very little chance of whipping up tension and using this as a pretext to enact these controversial laws like family planning laws. They won’t be able to instigate the close-minded, simple, pious Buddhist on the ground that Muslims are overpopulating and they’re trying to wipe out entire Burmese Buddhist population.

"From the darker side, that will prove that the image of Myanmar society as a pluralistic, multi-racial, multi-religious society will be diminished."

But some Muslim leaders believe an inaccurate representation of the Muslim community will affect development.

"Economic plans, educational plans, health plans - if the statistics are not correct, they’ll not get the correct planning for these sectors so that will detrimental to the entire nation, not only to the Muslim population," said Al-Haj Aye Lwin, who is also the founder of Religions for Peace Myanmar.

More than 100,000 Rohingya were displaced by deadly clashes with Buddhists in 2012 and now live destitute in camps in western Rakhine state. They are denied citizenship and face severe restrictions on their movement and access to basic services.

Just days before the census was carried out in 2014, Buddhist nationalists accused the international community of bias towards Muslims and attacked humanitarian offices in Rakhine, forcing aid workers to flee.

De facto premier Suu Kyi has faced criticism for not taking a stronger stance on the Rohingya or publicly condemning two recent attacks on mosques in other parts of the country. But her government has made moves in recent weeks to rein in the Ma Ba Tha, a monk-led movement at the fore of anti-Muslim protests in recent years.

Under the previous military-backed government, the nationalist group successfully lobbied for the passage of controversial race and religion laws that rights groups say discriminate against women and religious minorities.

Earlier this month Suu Kyi's religion minister warned the group could be disbanded if it uses hate speech to stoke conflict.
TOP