Some of the structures, constructed from the 10th to the 14th centuries, were engulfed in huge clouds of dust when the tremor struck, while others lost their iconic tips.

BAGAN, BURMA -- Using brooms and their hands, soldiers and residents of an ancient Burma city famous for its historic Buddhist pagodas began cleaning up the debris Thursday from a powerful earthquake that shook the region and damaged nearly 200 temples. 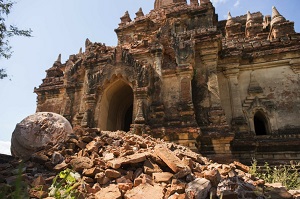 At least four people were killed and as many as 185 brick pagodas were damaged in Bagan after a 6.8 magnitude quake struck the area on Wednesday. The tremor was centred about 25 kilometres west of Chauk, just south of Bagan.

Bagan, also known as Pagan, is one of Burma’s top tourist attractions, drawing visitors from all over the world who can view a panorama of temples stretching to the horizon flanked by the Irrawaddy River.

Bagan is home to more than 2,200 structures, including pagodas and temples constructed from the 10th to the 14th centuries. Many are in disrepair while others have been restored in recent years, aided by the UN cultural agency UNESCO.

Zaw Naing, a caretaker at one of the city’s pagodas who paints and sells his work to tourists, said he was saddened by the damage — but also worried the quake could endanger the livelihood of many who live there.

“I’m very worried ... there will be less tourists to Bagan,” Zaw Naing said. “I have three children to take care of.”

As he spoke, soldiers and residents who work in the area could be seen picking up broken red bricks with their bare hands and stuffing them into sacks. Others swept walkways leading to temples that had been engulfed in huge clouds of dust when the tremor struck; the iconic tips perched on the top of some of the pagodas had collapsed.

Local government officials were also inspecting the area and holding meetings about the damage.

On Wednesday, Dr. Myo Thant, general secretary of the Myanmar Earthquake Committee, said other areas apparently were not badly affected.

Police officer Htay Win in Pakokku, about 70 kilometres from the epicentre, said one person there had been killed and one injured. “The person was killed by falling bricks from a building,” he said.

The Ministry of Social Welfare, Relief and Resettlement reported two other deaths in nearby Thitapwe village.

UN spokesman Stephane Dujarric said Secretary-General Ban Ki-moon was “saddened” by the loss of life and damage from the earthquake and expressed his condolences to the “people and government” of Burma.

He said the UN Office for the Coordination of Humanitarian Affairs was in contact with authorities in Burma and along with its partners stands ready to support the government and local organizations.

Vincent Panzani, a staff member in Pakokku for the aid agency Save the Children, said several of his colleagues from the area described the earthquake as the strongest they have experienced.
The earthquake was so strong it was felt across Thailand, India and Bangladesh.

“We felt quite heavy shaking for about 10 seconds and started to evacuate the building when there was another strong tremor,” he said in comments sent by email. “Most of the reports of damage have been to the pagodas in the area with dozens impacted.”

Worried residents of Rangoon, the country’s main city, rushed out of tall buildings, and objects toppled from tables and from Buddhist shrines in homes. However, there were no reports of serious damage in the city.

The last major quake in the area — which is often affected by smaller tremors — occurred in April about 300 kilometres further north, and measured magnitude 6.9. It caused no reported casualties and only minor damage.
TOP