Yangon, Myanmar -- The mass media in both the West and Islamic world needs to find space in order to simplify hatred. It matters not if turning a blind eye to Sunni Takfiri massacres in Syria and the nations that are endorsing this, nor that in Myanmar’s recent history more Christians than any other non-Buddhist faith group have been killed based on ethnic and religious tensions. Instead, the simple version – while negating the Christian angle – is that Muslims are killed and targeted by radical Buddhists. 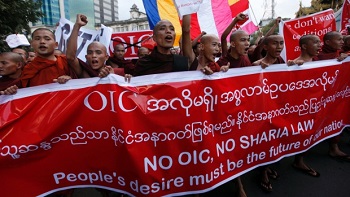 Ironically, the latest chain of events began after Muslims killed nine police officers in Rakhine state. International Crisis Group reports, “The attacks were carried out by Muslims, according to both government statements and local sources. An unverified video of the attackers, filmed in the wake of the attacks, has been circulating on social networks and seems legitimate. In it, one of the group calls on “all Rohingya around the world to prepare for jihad and join them”. This, the need for local knowledge to carry out the assaults, and the difficulty of moving large numbers of people around this area are all suggestive of local Muslim involvement – possibly organized with some outside support. However, many details of who exactly organized this and how remain unclear.”

Myanmar is blighted by many internal rebellions and is struggling on the path to democracy. Indeed, while the mass media is focused on the plight of Rohingya Muslims in Rakhine state, you have other continuing convulsions that are well outside Buddhist-Muslim issues. For example, Myanmar News reports, “About 3,000 Myanmar citizens fled across the border after the Kachin Independence Army (KIA), Ta’ang National Liberation Army (TNLA), Myanmar National Democratic Alliance Army (MNDAA), and Arakan Army (AA) staged a coordinated attack on military outposts, police stations, and a trade center in Muse and Kutkai townships. Ten people were killed and 33 others were injured during fighting on Nov. 20-22.”

Free Burma Rangers equally highlights the recent conflict between central authorities and different ethnic groups – many who are mainly Christian. In this incidence, the Free Burma Rangers reports, “In the last month sporadic fighting in two separate incidents was reported in Central Shan State between the Burma Army and the Shan State Army-South (SSA-S). The clashes were deliberate actions by the Burma military and corresponded with the deployment and rotation of two separate Burma Army infantry battalions in the region. The attacks came within the first anniversary of the Nationwide Ceasefire Agreement (NCA), which was signed October 15th, 2015… The attacks caused thousands of people in the region to flee, with rangers reporting over 2,000 people displaced and living in nearby IDP camps.”

UCA News reported last month, “At least 30,000 people from different faiths and ethnic groups were estimated to have taken part in a demonstration in Myanmar’s northern Kachin State on Oct. 22 where they demanded an end to military operations in the region… Protestors, including Catholic priests and nuns, held placards that read, “stop civil war” and “may there be peace in Myanmar” on the streets in Myitkyina, the capital city of Kachin State.”

UCA News continues, “The fighting between the Kachin Independence Army (KIA) and the Myanmar military in Kachin and Shan states is considered the most severe of the country’s four ongoing conflicts.”

In other words, countless issues are underreported because it doesn’t suit the simplistic anti-Buddhist agenda in relation to the Rohingya Muslim crisis. Myanmar is clearly faced with countless ethnic and religious issues – alongside the road to democracy, countering poverty, narcotics, and the legacy of history. Despite this, the media is fixated on a one-dimensional approach – just like the mass media response to the crisis in Syria based on utterly biased reporting.

In a regional context it is abundantly clear that certain Buddhist clerics are disillusioned and aghast at the cleansing of Buddhists in the Chittagong Hill Tracts in Bangladesh, countless terrorist attacks by Islamists against Buddhists in Southern Thailand, the destruction of holy Buddhist places in Afghanistan by Sunni Takfiris, endless Han migration to Tibet in order to dilute the influence of Tibetan Buddhism, and other issues, for example Buddhism is illegal in nations like Saudi Arabia (the same Sunni Islamist nation is intent on spreading Salafi Islam into the heart of Buddhism). Therefore, from the point of view of Buddhist clerics in Myanmar who support the protection of Buddhism internationally, these regional and historical realities are being neglected by a simplified Western and Islamic media bias.

Internationally, Sunni Takfiri Islamists are killing various non-Muslim faith groups and minority Muslim sects, including the endless butchering of Shia Muslims in many nations. Similarly, while Hinduism is in free fall in Bangladesh and Pakistan, the opposite can’t be stated for Islam in India. In other words, the endless one-way civilization war equally applies to the Indian subcontinent. Not surprisingly, and with Buddhists being cleansed in neighboring nations, then militancy within Buddhist circles in Myanmar is deemed to be self-defensive.

After all, historically, Buddhists understand full well that Islamic invading armies destroyed countless numbers of holy Buddhist monasteries and places of learning over many centuries. Indeed, while Christian and Muslim slavery of black Africans is a historical reality, with Muslim slavery starting first on a major scale in Africa and ending last (still issues of slavery in Mauritania and in the recent history of Sudan), then the Buddhist view in certain circles in Myanmar is based on self-preservation, the need for an alternative voice to be heard, and to tackle mass distortions.

Media outlets that condemn Buddhists in Myanmar are neglecting the reality of what Sharia Islamic law means to faith groups including Buddhists and Hindus. Are these religious minorities equal in Islamic Sharia states? Can Buddhist males freely marry Muslim females in nations like Saudi Arabia? The answers are obvious because non-Abrahamic faiths have been treated brutally under Islamic Sharia law throughout history. Likewise, in modern day Saudi Arabia if a Buddhist male fell in love with a Muslim Saudi female then he would face prison – or death in accordance with the tenets of Islamic Sharia. Yet, you don’t see major Western and Islamic media outlets stressing “Islamic fascism” and so forth but similar labels are aimed at Buddhist clerics in Myanmar.

Similarly, in Myanmar – and nobody is negating that massacres have taken place against Muslims in this nation – the simple reality is that more Christians belonging to various ethnic groups, for example, the Chin, Karen, and Kachin, have been killed than any other non-Buddhist faith group. Despite this, over the many decades you never had the same outpouring of “good” against “evil,” or headlines stressing “Christian genocide” to anything like the degree of the Muslim focus in modern day Myanmar. In other words, an agenda by the Western and Islamic media is at hand whereby Sunni Takfiris will manipulate a biased media – just like the endless rhetoric against Syria – in order to propagate more Sunni Islamist militancy in nations like Bangladesh.

Massacres and intimidation have happened on both sides in Myanmar but like Kosovo, Libya, Syria, and Yemen, you have a favorable Western and Sunni Muslim media joint angle opposed to the brutal one-sided other. Similarly, the Christian angle of alienation and persecution in Myanmar is being reduced to a completely different way of reporting. Once more the mass media is stoking fires based on the usual one-sided agenda. Therefore, Sunni Islamists in Bangladesh who are killing secularists, writers, and persecuting religious minorities, will gain from one-sided distortions. The same equally applies to the Sunni Islamist Takfiri agenda including ISIS (Islamic State – IS), al-Shabaab, Al-Qaeda, Boko Haram, and a plethora of other sectarian and terrorist groups – and to certain nations including Saudi Arabia that bans all non-Muslim holy places throughout the entire nation.

Sabre rattling by the media and United Nations will only lead to further bloodshed because sooner or later international jihadists will enter the fray.
TOP