YANGON, Myanmar -- A Myanmar government commission that investigated allegations made by an international human rights organisation and the media about the country’s security forces abusing the human rights of Muslims known as Rohingyas in Rakhine State has found these allegations to be “unproven” and slammed its critics, including the United Nations, for carrying out an international “smear campaign” against the country. 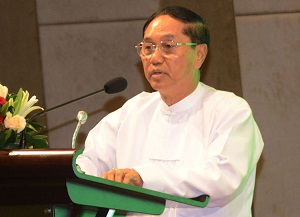 The 13-member Investigative Commission on Maungtaw in Rakhine State headed by Vice-President U Myint Swe released its report at a press conference on August 6.

It said that it found no possible evidence indicating any crime against humanity or any acts of ethnic cleansing as alleged in a report by the United Nations Office of the High Commissioner for Human Rights (OHCHR) released in February this year.

However, it called on the government to take urgent action and implement a long-term plan to address the problems plaguing Rankhine State, one of the poorest areas in Myanmar.

The commission gave 48 recommendations that include governance, national and border security measures to deal with the UN and international non-governmental organisations, citizenship verifications, socio-economic matters and religious affairs.

The OHCHR report was based on interviews carried out in January 2017 with 204 Rohingya refugees who had fled the border to Bangladesh from Rankhine State. The government commissioned report said that many of the stories of abuse included in that report were unsubstantiated, and exaggerated the numbers of deaths, injuries and displaced persons “with the intention of tarnishing the image of Myanmar internationally.”

“Sadly we found that OHCHR report fails to describe the brutal acts and murders by terrorist organisations against members of security forces in the first instance in the Maungtaw area in October last year, or the indiscriminate killing and intimidation of natives and Muslim villagers, or terrorist training by terrorist organizations,” said Myint Swe at the media briefing.

The vice-president also described the attack of October 9, 2016 on the Border Guards Police Force Headquarters and other police stations as an “act of rebellion” and the crackdown by the armed forces that followed as an “area combing operation”.

In a statement issued from abroad, the Arakan Rohingya National Organisation (ARNO) claimed that the commission lacked independence and a proper mandate, and that the report is a ploy by the Myanmar government “to prevent an independent international investigation from delivering justice.”

The government of Aung San Suu Kyi has said that it will not grant visas to an UN investigation team appointed by OHCHR to visit Myanmar because it is not confident of its independence.

Retired Union Minister and commission member Aung Kyi told the media that it was not possible to investigate some of the allegations made in the OHCHR report. “It is difficult to prove what really never existed,” he said.

“Some of the cases are caused by misunderstandings, some are totally untrue and some are group-wise hatched lies. We are reluctant to make quick conclusions. But, the international community is making hasty decisions”.

He added that if the OHCHR had waited for the commission report, its report would have been more balanced. “Unfortunately the report was issued in haste. This has enlarged the problem rather than solving it,” he noted.

In a statement issued from the Netherlands, the European Rohingya Council (ERC) has urged the Suu Kyi government to allow the UN fact-finding mission to the country “to impartially investigate the violence”, but the government appointed commission’s report indicates a wide gap between what the overseas-based Rohingya activists and their supporters say and what seem to be the ground reality.

The government commission has visited the Maungtaw area many times and also refugee camps in Bangladesh to verify the OHCHR report. The commission has also given time for anyone in the camps to file lawsuits.

In releasing the commission report, Myint Swe warned that the seizure of large quantities narcotic drugs in Maungtaw region indicates the likelihood of illicit drug trafficking in the area that feeds the insurgency along with other illegal businesses.

The commission has recommended imposing “administrative restrictions” on people in Muangtaw area to prevent people whose citizenship has not been verified from fermenting unrest and extremism among the Muslim population in the state.

Aung Kyi has argued that Rohingya activists would like to establish a case of genocide so that their rebellion could be seen as legitimate under international law.

He said that when the commission scrutinised the actions of the Rohingya militants there was a clear path of how they collected arms and attacked security forces, looting arms and ammunitions from the quarters of security forces and devising methods to prevent the armed forces from retrieving them. “They tried to concoct a make-up story of existence of genocide or racial cleansing in Rakhine State using the media. This sequence of actions indicates that they intend to fabricate a story in trying to support the accusations,” he said in expressing a personal viewpoint.

The commission has concentrated on studying the freedom and security of the people in the area and it sees attacks on security forces as threatening both and also the sovereignty of the State.

The commission has pointed out that the group which describes itself as the Arakan Rohingya Salvation Army (ARSA) has as its leader Habat Dula who was born in a village in the area but lived most of his life overseas, especially in Saudi Arabia. He has also received military training in Pakistan and Bangladesh.

The report claims that this group is funded by Rohingyas who have fled the Maungtaw area and live mainly in the Middle East. Persons coming across the border from Bangladesh have also provided military training for ARSA members.

“Definitely there are foreign connections” argues Aung Kyi. “But, we can’t say exactly whether those organisations are terrorist groups or not.”

Fellow commission member, Dr Tha Nyan, general secretary of the Young Men’s Christian Association (YMCA) told the media that in Maungtaw area there are 1278 mosques, 121 Buddhist monasteries, 17 Hindu temples and seven churches, and Muslims are allowed to say their prayers publicly. “These figures prove that there is no religious persecution and racial discrimination,” he noted.

The government of Suu Kyi has launched a campaign this month through the Ministry of Information to raise awareness of the general public on how it is to live in conflict areas.

She argues that national reconciliation is very important for Myanmar’s development but at the same time admits that it is a tough ask. She said the object of her peace dialogue was for people living in peaceful villages to know more about how people live in non-peaceful areas.

“Our Information Ministry will have to do public awareness about how our brothers and sisters in non-peaceful areas are living,” she was reported to have told an audience of village elders by Myanmar Times. “Only then will the public understand the different situations, even though they are living in the same land and drinking the same water.”

Meanwhile the Rankhine branch of the ruling National League for Democracy (NLD) has called on the Union Government to increase security in the region. There have been a spate of attacks on villages in recent months where over 40 people have been killed including an August 4 attack in a village where knife and gun injuries were found on six people killed by suspected ARSA terrorists. Members of the Border Guards were also attacked.

“People have been killed in northern Rakhine State. Violence has been occurring. There is no law and order,” U Myo Kyaw, member of Rakhine NLD Party Organising Committee, told The Myanmar Times at the beginning of August.

It has also been hinted that international organisations working in the region have fuelled the violence. “In this region, government personnel have been attacked while they are servicing. Attackers raid even border patrol stations of the border police forces and there is no assurance for people’s lives,” he added.

The Arakanese Young Monk Association has also added its voice to monitoring activities of local and foreign NGOs in the region. It has called on the government not to allow international organisations in Maungdaw, which were allegedly “providing aids to Bengalis”.

The Buddhist monks have urged the government to implement tighter security measures in Maungdaw to prevent conflicts in the area, adding that they will launch a protest “soon” to dramatise their demands.

--------
This article is the 17th in a series of joint productions of Lotus News Features and IDN-InDepthNews, flagship of the International Press Syndicate.
TOP