The Full Moon Day of Thadingyut or Lighting Festival of Burma 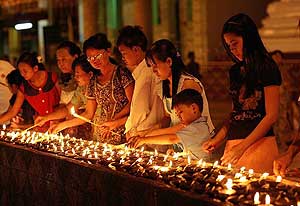 The celebration of this festival is to illuminate the anniversary of Buddha's return from heaven (Savatimsa) where He had spent lent. Lent covers a period of three months when Buddhist monks retreat. During Lent monks may not travel anywhere.

Why did the Buddha spend Lent in heaven?

Queen Mayadevi died after giving birth to Buddha. She was reborn in heaven. Seven years later, the Buddha went to heaven in order to express gratitude to His mother. He spent Lent (three months) there, preaching the Abhidhamma (the profound teaching of Buddha) to His mother goddess and the other gods.

After end of the Lent (Full Moon Day), the Buddha returned from heaven to the human world, people from all over the country lit candles to welcome Him back. As years passed by, it became a tradition and a festival. When this festival takes place in a small town and villages it is more enjoyable than it is in cities.

On the festival day itself, groups of young people and children can be seen walking with candles and gifts in their hands, paying respect to elders. In Burmese we call this Kadaw, actually it is more than paying respects or doing obeisance. For Buddhists, the Buddha, His teachings (Dhamma), Monks (Sangha), Parents and Teachers are the first to receive this honour, next are those who are older and then those to whom we owe gratitude.

Weddings are taboo during the Buddhist lent, therefore weddings during this period are rare. Though is more fun to begin one's married life amidst festivities. Thadingyut, therefore, is not only replete with festivities, but is also an auspicious time for Burmese to practice the custom of remembering gratitude.

Younger people pay homage to elders during this season. They ask for forgiveness if they have committed any harm and in return, the elders return love and forgiveness.