Yangon, Myanmar -- A NEW modern village is to arise from the destruction wrought by cyclone Nargis, thanks to the generosity of Buddhist well-wishers coordinated by a religious advisor from Sri Lanka. 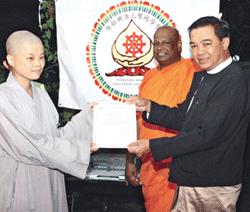 << A Buddhist nun from Taiwan (L) hands a donation to U Sein Tin Win, the managing director of Myanma Petroleum Products Enterprise under the Ministry of Energy (R), as the Venerable Dr Bodagama Chandima Thero looks on.
Pic: Lwin Maung Maung

The first phase of the project, comprising 400 homes, is due to be inaugurated by the Sri Lankan embassy in Yangon in December, in Yangon Division.

“We’ve obtained permission to set up a village from the government, which has already granted 180 acres of land between Kamapar village and Naung Gue village in Kungyangon township,” the Venerable Dr Bodagama Chandima Thero, an international religious and cultural adviser to the president of Sri Lanka, told The Myanmar Times last month.

Each house will cost US$1250 to build, for a total construction cost for the 400 homes of $500,000. This is exclusive of the cost of future roads and other buildings such as a clinic, Dr Bodagama Chandima Thero said.

The village is similar in design to a model village on Sri Lanka’s Indian Ocean coastline called Hambantota, which was built after the destruction caused by the 2004 tsunami.

“We have not named the village yet. We will build not only houses but also roads, schools, a mini clinic, a community hall, a library, a computer centre, a stadium, gardens and an administration office in the village,” said Dr Bodagama Chandima Thero.

“This is the third time I have come here to help people affected by Cyclone Nargis. Once I heard the tragic news of the cyclone, I came here first in June at the request of our Sri Lankan president to negotiate with the Myanmar authorities, and to find out what was happening in detail,” he said.

He and his followers decided to assist people in Yangon and its environs affected by cyclone, especially in Kungyangon.

“So far, we have contributed more than $720,000 worth of goods in kind to cyclone victims,” she said.

“We, Sri Lanka and Myanmar, have had a long traditional relationship in terms of culture and religion since time immemorial. Most Myanmar are Buddhists, and we share the same religion,” said Dr Bodagama Chandima Thero.

He said people in the affected area had no money or homes but they had loving kindness because of Buddhism.

“So we came here to help, and we continue to help,” he said.