Yangon, Myanmar -- A controversial photo of a Burmese actor and his friends wearing saffron robes had been posted on a popular Burmese blog, creating a severe outrage within the Burmese blogger community. 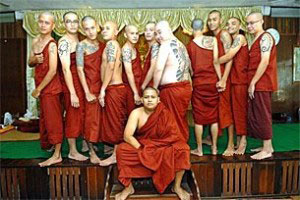 The photo shows the actor Min Maw Kun, photographer Wunna Khwar Nee and his friends at their ordination ceremony at a Burmese monastery. Yet, the appearances of the “new monks” raised an eyebrow among the Burmese Buddhist community.

The photo was first posted on Niknayman's blog, who questioned the intention of the actor.

"Saffron robes are revered, and they are only worn by monks, who are regarded as the sons of Lord Buddha. Those in the photo shouldn't be wearing saffron robes, and posing with those facial expression and fake tattoos. Such a thing like this shouldn't happen for any reason."

Afterward, the photo was copied and re-posted on several Burmese blogs. Many Burmese were outraged by this photo. This included Ashin CandoBhaSaCara, a revered monk who lives in US. He had written an article, with the title “Why Did Actor Min Maw Kun Insulted Our Religion Like This?”, appeared on many Burmese blogs. In the article, he explained about the duties and responsibilties of a Buddhist monk, and told the wrongdoings of the actor by breaking all those rules of a monk.

"An actor has to respect the public. He has to do the right things while avoiding the wrong things. Min Maw Kun and his friends had lost his value by doing a disdainful act such as this. His father, (actor) Zin Wine is also responsible for this, for the acts of the children is directly held responsible to the parents. Also, the head monk and the monastery who had put robes on these people is also very foolish. The monk who held the ordination ceremony might not actually know about this foolish act. However, everyone with a sane mind would know that this act is not in anyway acceptable in Buddhist culture. This just show what kind of person the actor Min Maw Kun is, who is making videos that will educate the public."

However, on Radio Free Asia Burmese website, the actor Min Maw Kun said that he had no other reason for taking those photos, and that he had expressed his apology for his behaviour.

"I have no reason to offend Buddhism. I have no reason to offend the monks either. They are the jewels that we should be worshipping. Sure, we put tattoos on our bodies, but that's just us being youths. I became a monk along with my son, and we went though the ordination ceremony together. The photos were taken while we were cleaning at the monastery just as a memoir. It was taken about 2 years ago. Since people are talking about this, all I have to do is be cautious of my actions. I have no other intentions, and I  was just being a youth. For that, I want to express my apologies to all the monks."