An upcoming conference in Thailand will bring together female Buddhist monastics from around the world. 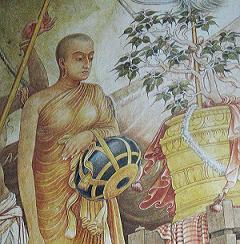 << Sanghamitta
Photo above of a painting at the Kelaniya Temple in Colombo, Sri Lanka, depicting Bhikkhuni Sanghamitta, daughter of Emperor Ashoka, arriving on Sri Lankan shores to start the lineage of female clergy.

If you drop by the Sathira Dhammasathan nunnery-cum-dhamma centre this weekend, you will realise how the clergy's attempts to keep women down are ineffective and irrelevant.

For one whole week starting this Sunday June 12, the lush greenery of the dhamma centre will be enlivened by different shades of the saffron robes of female monks interspersed with the white robes of nuns. The soothing sounds of their chants will also fill the atmosphere with a message of peace and sisterhood.

They will be coming from around the world - female monastics, scholars in Buddhism, social activists - for the Sakyadhita International Conference, where they will discuss practical uses of Buddhism in contemporary society, review the barriers Buddhist women face in developing their full potential, and share recent studies of interest for Buddhist women.

The pursuit of knowledge is definitely not the sole reason why they are travelling across the globe to attend this once-every-two-years meeting.

Female ordination for women in the Theravada Buddhist tradition was unthinkable three decades ago. It is now a reality. The Bhikkhuni or fully-ordained female equivalent of the monk, may still face many obstacles while Buddhist women routinely face institutionalised gender discrimination. But there has also been progress.

Working against the odds in this male-dominant world, you need a lot of inner strength. The Sakyadhita meet is where they come together to celebrate the possible. And to fortify their determination through connecting with the positive energy of others in the same cause.

Interestingly, a meeting that is rooted in the pursuit of gender equality in Buddhism is taking place at a nunnery. The mae chee or white-robed nuns, are not even considered clerics under Thai law. More interesting is that Mae Chee Sansanee Sathirasuta, the nunnery's founder, has never showed interest in female ordination, although many nuns have discarded their white robes to become fully ordained in saffron.

In a society obsessed with hierarchy such as ours, female ordination does pose a potential conflict. Nuns are inferior to monks, and now do the mae chee have to be inferior to bhikkhunis, too

Fear of persecution by the clergy has also prevented many white-robed nuns to venture onto the bhikkhunis' path.

The clergy is often criticised for using the mae chee as temple hands. But there must also be women who are perfectly happy just to serve. Are they not to be counted as equals among monastic women.

Any system which opens only one sole answer to spiritual development is oppressive. The male clergy has been monopolising spirituality within men's domain while nurturing authoritarianism through strict hierarchy. There is no reason why the female clergy should repeat the same mistake.

Sakyadhita means daughters of the Buddha. If they really are so, they must realise the hollowness of form and label, whatever the colour of their garb and whatever name they are called. This is what is refreshing about this Sakyadhita meet. It is not only to celebrate the possible, but also the diversity of women on the spiritual path.

This does not mean that we should dismiss the problems the majority of bhikkhunis and nuns are facing. Nor should we overlook the need to tackle structural gender oppression so as to unleash women's potential on all fronts, not only their spirituality.

Once men are ordained, they get all kinds of support from the Buddhist public. Not women. Unlike Mae Chee Sansanee who has media skills to spread the dhamma and money to support her good work for women, most nuns are struggling on their own to live a monastic life and to be of service to society.

It is all right to discuss what the white-robed nuns have been doing to improve their sisters' condition. But it is also important to uncover and tackle the root cause of gender oppression.

This will not only make life easier for bhikkhunis and mae chee. Monks' spiritual life will also benefit if they can eventually transcend their gender prejudice.