Thailand To Tattoo Tourists: Think Before You Ink

Bangkok, Thailand -- Many of Thailand's tattoo tourists find their way to Bangkok's Khao San Road, where tattoo parlors are nestled among the Internet cafes, noodle stalls and other backpacker hangouts. A visitor along this road might pick up a tattoo, along with some beads and dreadlocks, and perhaps even a nose ring. 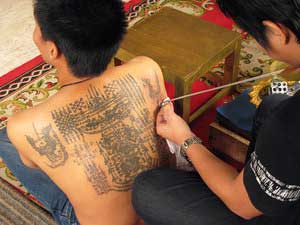 << A disciple of Master Noo Ganpai tattoos elaborate Buddhist designs onto the back of a customer. Anthony Kuhn/NPR

The Thais are famously welcoming to visitors. But last month, Thai Culture Minister Nipit Intarasombat called for a ban on foreigners' getting religious tattoos that offend Thai people.

The issue came up after an incident in the southern tourist haven of Phuket Island. Exactly whose tattoo offended whom is not clear. Nor is any sort of tattoo illegal under Thai law. But Thais consider the head sacred and the feet profane, and some foreigners get Buddhist tattoos below the waist, which can upset Thais.

"There are some tattoo artists who only care about money," confides Pongsuk Tammaget, who runs the Max Body Tattoo Parlor. "They heed no rules or regulations. If the law is aimed at them, that's fine by me. If I see foreigners with tattoos in the wrong place, we notice it. It's not good, and it offends Thai people's sensibilities."

The details of the minister's ban are a bit vague. But the Culture Ministry says it intends to print guidelines for religious tattoos and inspect tattoo parlors for compliance.

In an alley just off Khao San Road in Bangkok, an Australian man who goes by his Buddhist name, Tao Jaiphet, is checking out the tattoo parlors. He extends an arm adorned with sacred tattoos known as Sak Yant and comments that his tattoo master would never do these anywhere below the belt.

Tao explains that his window on the local culture is the art of Thai boxing.

"I was a boxer here. I was living here in the late '90s, and it's quite common for Muay Thai fighters to get Sak Yant," he notes. "I think they were kind of like the first, before Angelina Jolie got on the bandwagon. A lot of the boxers would get Sak Yant to protect them while they're fighting."

Master Noo Kampai is a former Buddhist monk who illustrated the back of actress Angelina Jolie — perhaps the most famous of tattoo tourists — with a crouching tiger and rows of sacred scripts. Master Noo explains that tattoos are essentially like amulets. He goes into a trance and channels the force of his teacher and the Buddha into his magic tattoos.
A disciple of Master Noo Ganpai tattoos elaborate Buddhist designs onto the back of a customer.

But Master Noo rose some time ago to guru status, leaving his young disciples to do much of the work. He agrees with the government's injunctions against improper tattooing.

"My message for those who want to get tattoos is that you should think it over repeatedly, because it'll be on your body for good," he said. "You should think about whether or not it will affect your job applications."

Another debate over public morals erupted in April, amid the water-splashing revelry of Songkran, the Thai New Year celebrations. In downtown Bangkok, three young women got up on parked vehicles, stripped to the waist and started dancing. Someone posted a video of it on the Internet.

In the ensuing uproar, Culture Minister Nipit called for the trio to be fined and to perform community work.

Professor Pavin Chachavalpongpun, of the Institute of Southeast Asian Studies in Singapore, says that the minister was apparently not concerned with Bangkok's Red Light districts, where standards of public behavior would make the topless teenagers look positively chaste.

"I just wish that, you know, we just be honest about what happens in Thailand," he laments. "And as a Thai, I mean, I find it frustrating because we know that, in reality, what I see every day in Thailand is just not what the state wants foreigners to see."

That is how many see the involvement of Thailand's military in politics. This spring, the army filed charges against the leaders of last year's "Red Shirt" political protests, as well as a Bangkok academic. Critics accused the military of using its self-appointed role as protector of the monarchy to silence political opponents.

Observers also noticed that even as Nipit fulminated about the topless girls, his ministry's website was adorned with festive folk art images of bare-breasted ladies. When this was pointed out, the images were quickly deleted.