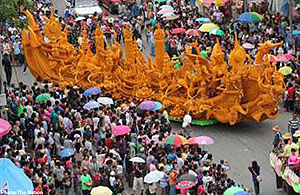 In Suphan Buri, a contest of 10 carved candle processions, presided over by former PM Banharn Silapa-archa, is being held until today. It attracted a large crowd, many of whom also attended merit-making at nine key temples in Muang district.

In Phitsanulok, Governor Preecha Ruangchan and residents gathered at Phra Sri Rattana Mahathat Temple to offer food and necessities to monks on the auspicious occasion.

In Chiang Rai, Thai and Burmese Buddhists thronged to worship relics of the Lord Buddha contained in the holy Phra That Doi Tung at Phra That Doi Tung temple. They offered monks necessities, including candles and robes, in the hope that such offerings on the Buddhist Lent Day would carry on the religious tradition and bring their families and themselves good luck.