Bangkok, Thailand -- Fed up with rogue monks? Losing hope in ability of the lax and closed clergy to lead the way? Meet Luang Por Ang, Luang Por Chair, and Phra Kru Somsri. All Isan monks. All dedicated to lift the livelihood and spirituality of their villagers. All are living examples of why monks still matter. Probably more so now than ever. 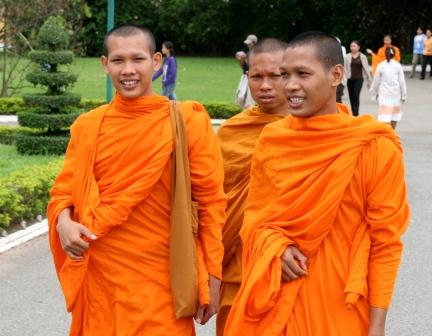 The three so-called "development monks" were in Bangkok earlier this week to talk about their past work and present challenges at a time when the rural folks' way of life and political awakening have dramatically changed from four decades ago.

"I finished only Prathom 4," said the elderly monk. "I never thought of such high words as inequality or development. But scarcity was all around me. Right from when I first became a monk, I kept asking myself what I could do to repay the poor villagers who feed me."

He led the villagers in building roads and bridges so that the sick could go to the hospital and farmers could sell their crops. He set up medicine banks, learned how to use needles and syringes, taught himself to be a mechanic, a house builder, and filled in whenever the rice paddies needed more labour. He helped the villagers set up community savings groups and welfare funds. He also succeeded in convincing the villagers to donate land to build a reservoir for common agricultural use.

When dusk fell, the monk completed his day's mission by talking to the villagers about the use of dharma in one's life.

At the height of the communist insurgency in the '70s, he was accused by the authorities of being a communist. "But that didn't bother me. All I wanted was to help the villagers."

He was not alone. Other development monks, like Luang Ta Chair or Phra Kru Amornchaikhun of Wat Asom Dhamatayat in Korat, faced the same fate when he led the villagers to save their community forests from the local mafia.

Fast-forward 40 years. Isan has now changed. So have the Isan people's aspirations.

Transportation, public health and electricity are no longer a concern. The region is now deep in the cash economy with all its urbanisation benefits and pitfalls. Modern telecommunications have connected the villagers with the world, reshaping the villagers' world-views, consumption patterns and life dreams. Farming, meanwhile, is still a losing business. Perennial debt and extra off-farm work have left the villagers little time for the community as before. Like the rest of the country, many villages have also slipped into the deep political divide.

How have development monks dealt with the new challenges?

Knowledge - both in technical skills and management - is now the key, said Phra Kru Somsri, whose official title is Phra Kru Bhodhivirakhun, abbot of Wat Bhodhikaram in Roi Et.

His temple operates as a non-formal education centre offering a wide range of occupational training free of charge so as to give the youth new skills and opportunities.

The temple has also set up a community grocery store, managed by the villagers as a cooperative. The community savings has also grown into a community bank, run transparently by elected village committees to provide low-interest loans, with profits going back to community welfare funds.

Working together is at the heart of these activities. And when the communal, open management structure is already in place, the community can deal with any new challenge, he said, including the political divide which is bridged only when the villagers have to rely on kinship and communal ties to solve common problems.

"When in the temple, they also have the chance to pray, to reflect, to be close to dharma to guide their lives," he added with a smile

More changes are coming. "But don't be alarmed," said Luang Ta Chair pensively. "You can't stop change. Nothing stays the same. It's part of dharma, the way things are. Our duty is to help the villagers be ready to cope with it."