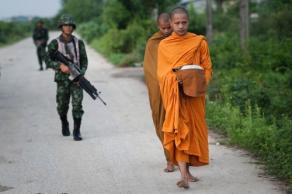 << Thai soldiers (L) providing security to Buddhist monks during their daily morning alms collection in the village of Leamnok on the outskirts of Thailand's southern province of Pattani. Photo courtesy: AFP

Since a deadly insurgency erupted in the Muslim-dominated region seven years ago, the army has become inseparable from religious rituals in the region, where troops live side-by-side with monks in monasteries.

At Wat Lak Muang, a few kilometres from the centre of the city of Pattani, soldiers armed to the teeth return from patrol in pick-up trucks from time to time, while monks in saffron robes busy themselves around a fire inside.

Around the stupa, prefabricated barracks have been set up for soldiers and armoured vehicles and transport lorries are parked nearby.

The eight monks living there are by far outnumbered by the roughly 100 soldiers -- a situation mirrored at other temples in the region.

The army says it is a mainly a matter of convenience.

"It doesn't mean that we're there to fight. It's only a shelter. There are buildings we can use for accommodation and we can take care of the security of local people."

Since 2004, Thailand's three southernmost provinces of Pattani, Yala and Narathiwat, near the border with Malaysia, have been riven by a complex insurgency that has claimed more than 4,800 lives, both Buddhists and Muslims.

Monks -- seen, like teachers, as a symbol of the Thai state -- are among the targets, sometimes shot or attacked with bombs while out collecting alms.

The militants denounce the Bangkok-based ruling elite and the kingdom's majority Buddhists, in a region where 80 percent of the population is of Malay ethnicity and Muslim religion.

More than ever, the daily religious routines take place under close military surveillance.

In the early morning, monks in pairs go on the traditional collection of alms -- normally gifts of food -- from the Buddhist faithful in the centre of Pattani, reciting prayers as they go.

It could be a scene from anywhere in the country -- apart from the armed bodyguards who closely follow the monks, surveying each doorway, blocking access to each street.

"The situation is bad," said a local shopkeeper who came to take part in the ritual.

But he added: "I don't think it's strange. There's nothing wrong with having soldiers with monks."

Analysts struggle to describe a conflict whose roots can be traced back to the start of the 20th century.

The leaders of the insurgency are difficult to identify, the militants are discreet and the claims of responsibility unclear.

People in the region complain of a long history of perceived discrimination against ethnic Malay Muslims by authorities in the Buddhist-majority nation, including alleged abuses by the armed forces.

While the Muslim militants are not viewed as jihadists, the presence in recent years of troops in the monasteries has brought a new religious dimension to the conflict.

"The militarisation of Buddhist temples is fuelling a sense that this is a clash between religions and that's a problematic direction to move in," said Duncan McCargo, an expert on the conflict with Leeds University in Britain.

In stark contrast to hardcore Islamic militants like Al-Qaeda, the Thai insurgents have not taken their armed struggle out of the deep south.

Moreover, the younger generation of insurgents, said McCargo, is not recruited on the basis of fundamentalist ideology.

But some soldiers have been ordained as monks in recent years. And rumour has it that certain monks are armed.

Officially, the monks do not complain. Most of the superiors approve of a military presence that they can, in any case, do little about.

"It's all right because monks live with monks, soldiers live with soldiers. We live separately," said Pipit Vavakarn Koson, the abbot of Narathiwat's Tung Kha temple.

"There were bombs in some temples, some were burnt down, some monks were killed. So I thought it's a good idea to have soldiers here with us. They can protect the villagers and will make them feel more calm."

But mosques have also been attacked in the past and there are no soldiers guarding those.

Religion is one of the three pillars of the Thai constitution -- along with the nation and the monarchy -- and nobody doubts that Buddhism is the de facto religion of the state.

"The presence of the soldiers in most, if not all, temples in this area makes it appear that temples are representations of the Thai state," said Srisompob Jitpiromsri, director of conflict monitor Deep South Watch.

Wat Tung Kha sits in the middle of an exclusively Buddhist village, an enclave protected by a military roadblock. The main street is covered with yellow flags, symbols of the monarchy, therefore the domination of Bangkok.

Ophat Yenbut, 66, lives with her husband opposite the monastery. She points to the house of her neighbours and explains that the couple were killed in a rubber plantation some years ago.

"I sleep better when I know that the soldiers are here to protect us," she said.