Bangkok, Thailand -- Monks are hard at work cleaning and repairing Mahachulalongkornrajavidyalaya University after the floods. 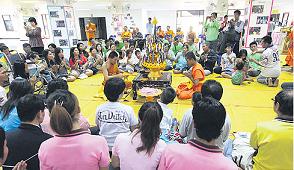 << People at the flood relief shelter at Mahachulalongkornrajavidyalaya University attend the baisee sookwan ceremony to boost their morale. Those who sought refuge are now leaving the university as the shelter is closing down and the areas inside the campus are now dry. SOMCHAI POOMLARD

The university is still surrounded by water, more than two months after runoff arrived.

Monks are cleaning a tower where the Tripitaka (Buddhist scriptures) and textbooks are kept, as others wash pathways, in preparation for when the university resumes its Buddhism course for 1,500 novices next week.

While the inside of the university itself is dry, the once lush landscape of the 330-rai campus is spotted with dead trees, a legacy of flood damage which the university puts at 200 million baht.

Many buildings are still vacant. Many occupants were forced to move elsewhere when runoff arrived on Oct 12. Today, fewer than 100 monks are staying at the university, though they are slowly tricking back as repairs gather pace.

Phra Sigambhirayarn, vice-rector for academic affairs, said the university will draw on donations and state financial support to fix its electricity system and restore its damaged landscape.

"I don't think the government could meet all our requests, so we have to fix the most important things first," said Phra Sigambhirayarn.

He said the damage would be greater if soldiers, police and volunteers had not helped move more than 100,000 textbooks from the first floor of buildings inside the campus when the flood hit. Only 5,000 books ended up damaged.

Without a concrete wall to protect itself, the university ground was flooded when the run-off arrived, forcing the partial evacuation of 500 flood victims who had taken shelter at the university.

"I don't like concrete wall so an earth wall is an interesting option. But for next year, I hope the government will be able to warn us if floods are coming.

"The government should not hide any information as we should know how much water will be moving our way," he said.

Last Friday, 21 families hit by the flood bade farewell to the university when it closed its evacuation centre. A monk blessed them before they left.

Chayathip Tungpatcha, who attended the farewell ceremony, thanked the university for looking after her and her seven-month-old son.

"The centre is very special for me. We have monks who teach us religious principles. We pray every day, which helps reduce stress.

'Buddha's teaching makes us understand life and learn to accept loss. We were also taught handicrafts. Some people made more than 2,000 baht while staying here," she said. During her stay at the centre, her son fell ill with a lung infection. Soldiers took them to Rajavithi Hospital in Bangkok.

They stayed at the hospital for one week, before returning to the evacuation centre.

"HRH Princess Maha Chakri Sirindhorn visited the camp and gave us encouragement to fight on," she said.

The evacuation centre at Mahachulalongkornrajavidyalaya University was set up under the princess's royal initiative to help provide shelter to flood victims.

Bhakamol Rattaseri, assistant treasurer of the Chaipattana Foundation, said the evacuation centre was the first the foundation had been involved in.

Usually, the foundation offered only relief assistance in other forms. However, HRH Princess Sirindhorn thought an evacuation centre would be needed.

The foundation also set up two other centres in Ayutthaya and one each in Lop Buri, Chon Buri and Bangkok. She said the venture was a success thanks to cooperation from soldiers, police, medical teams from Rajavithi and Chulalongkorn hospitals and the business sector.