Bringing things out in the open

Bangkok, Thailand -- While a coyote-dancing monk who sparked public uproar has been suspended, the episode has led to a continuing debate over gay monks in the clergy. 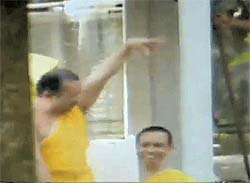 Earlier this week, the video clip of a monk jovially dancing with provocative sexual gestures went viral on the internet, causing an outcry.

Phra Maha Klairung Rujidhammo, a senior monk at Bang Bua Temple in Bang Khen district, later apologised, saying it was just a playful effort to relieve stress during the floods.

His abbot said it was only a minor lapse of monastic discipline. To appease those who were offended, however, Phra Maha Klairung was temporarily suspended from his post as temple secretary.

Many of his lay followers also defended him, saying he works hard for the temple.

The coyote-dancing monk scandal reflects a growing debate regarding the Thai Buddhist clergy, which is the issue of openly gay monks, says Buddhist scholar Tavivat Puntarigvivat.

"I'm not saying it's right or wrong, it's just that what is happening in the clergy is reflecting what's happening in society as a whole," he said.

"Gay people are now more confident in expressing themselves, and so are gay monks."

It is no longer shocking to see novices wearing make-up or making feminine gestures in public quite freely.

Many Buddhists wonder how this came about when ordination rules require a monk-to-be to declare that he is not a pandaka, which is taken to mean a male homosexual.

The accurate translation of pandaka remains debatable, however, since some Buddhist experts argue it is applicable to transvestites only.

Focusing on gay monks, which often generates prejudice, is focusing on the wrong issue of concern, said Mr Tavivat, assistant professor in philosophy and Buddhism at the World Buddhist University.

"The real culprits are the out-of-touch and centralised clergy who utterly fail in their duty, which is to train monks in spiritual development," he said.

When people of the same sex live in a big group together, homosexual relationships are common, he said.

"In the old days, however, local communities had effective social control over their monks and temples. If any monks committed sexual acts or sexual abuse, the villagers could blank or ostracise them," Mr Tavivat said.

The clerical reforms a century ago to bring the decentralised clergy under central state power has seriously weakened old community control on their monks and temples, he explained.

The relative egalitarian clergy of old Siam has been turned into a hierarchical bureaucracy with senior monks holding positions of feudal lords in their closed system. Under the new system, wayward monks can no longer be punished by the locals, he says. The case must be go through the hierarchy. With bribery, bad monks may even get away with murder.

The situation became even worse with the 1962 Monk Bill which made the clergy an authoritarian organisation of elders where dissent is not tolerated.

Sexually active gay monks are just one of the problems, he said.

However, Mr Tavivat points out that anybody - men or women, gay or straight - has equal potential to attain spiritual liberation.

"This is what Buddhism believes," said Mr Tavivat.

According to monastic disciplines, the preceptors have the duty to train people they ordain to transcend greed, anger, lust and delusion in order to attain spiritual liberation.

"Gay monks are not the problem. The problem is the lack of spiritual training which should have been provided by the clergy," he said.

The solution, he stressed, is to abrogate the authoritarian Monk Bill as well as the clergy's feudal practices to return temples to local communities. "Problems will ease if monks are accountable to communities again," he said.