Bangkok, Thailand -- More than a thousand Buddhist monks trekked across six provinces, going from temple to temple, to bring peace and harmony to the areas most affected by last year’s floods, the worst in 50 years. Government estimates put the death toll at over 800 people and the damages at US$ 40 billion. Venerable Phrathepyanmahamunee, abbot at the Dhammakaya Temple and president of the Dhammakaya Foundation, is behind the initiative. 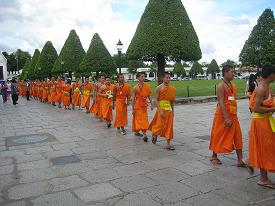 << A delegation of Buddhist monks treks across six provinces to restore “peace and harmony” to flood-hit regions. Along a journey of more than 360 km, they touch the main temples. As the Buddha did in the past, the monks want to heal wounds and bring grace to the nation.

Some 1,127 monks undertook the march, named Thudong Dhammachai or ‘Walking to win through Dhamma or Buddha’s teachings’ in Thai, in order to act as living witnesses to Buddhist values and build harmony between the various groups in society, shaken by the extent of the disaster.

The journey began on 2 January at the Dhammakaya Temple and ended yesterday, after a trek of 365 km across six provinces, Pathumthani, Ayudhaya, Supanburi, Nakhon Pathom, Nonthaburi and Bangkok, where they touch all the main monasteries.

In each community, the monks were warmly welcomed and praised by local residents, including students, business people and provincial governors and authorities. Rose petals were scattered along the path they followed as a token of respect. At each stage, a common prayer was held.

Natural disasters occurred at the time of the Buddha, said Dhammakaya Temple spokesman Phra Sanitwong Buddhiwangso. When an outbreak of cholera hit the city of Paisalee for example, residents invited the Buddha and 500 of his followers to come so that their presence and prayers could bless them.

For this reason, monks walked across many provinces to “restore the spirit and mind of the faithful” and “bring grace to the nation”.

The most significant moment in the Thudong Dhammachai march came when participants reached Buddhamondhon Temple, one of the most important centres of modern Buddhism, classified as a world heritage site by UNESCO.

Inside, an imposing 16-metre statue of the Buddha stands surrounded by representations of his life. In a nearby temple, the entire Buddhist canon is engraved on 1,418 marble steles.

A few months ago, floods covered the area, requiring a major cleanup of the temple itself and its surrounding land at a cost of almost US$ 13 million because the “underground electrical system was completely destroyed.”